The Czech Republic’s top tennis players are set for action at the US Open, the final Grand Slam of the year. The country’s best hope for success appears to be Karolína Plíšková, who is seeded third in the women’s draw at Flushing Meadows. 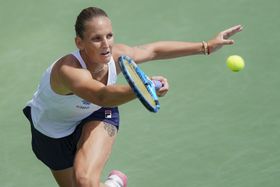 Karolína Plíšková, photo: ČTK/AP/John Minchillo Karolína Plíšková, who is 27, will play her opening match on the hard courts of the United States Open Tennis Championships on Monday. Her first opponent will be a compatriot, 24-year-old qualifier Tereza Martincová.

Plíšková is the competition’s third seed, making her the top ranked Czech singles player. She has been world number one in the past but has yet to lift a Grand Slam title, despite reaching the 2016 final in New York.

Not far behind Plíšková in the rankings is sixth seed Petra Kvitová. The 29-year-old is a two-time Wimbledon winner.

Interestingly, Kvitová too faces a Czech in round one at Flushing Meadow, Denisa Allertová, who made it into the draw as a qualifier. Their first round clash takes place on Tuesday.

However, Kvitová has not been having an ideal summer. She has been suffering from a left forearm injury and has only played one game since Wimbledon, when she lost in Cincinnati.

Karolína Muchová will no doubt be looking forward to her return to the stage where she first came to international prominence last year after sending two-time Grand Slam champion Garbine Muguruza packing in round two.

In the men’s draw Tomáš Berdych and Jiří Veselý are the main Czech names to watch. Berdych, who was world number four back in 2015, missed last year’s US Open through injury.

Unfortunately the top Czech doubles pair, Kateřina Siniaková and Barbora Krejčíková, will not be taking part in the final Grand Slam of 2019 after the latter got injured in singles qualifications in the Big Apple.