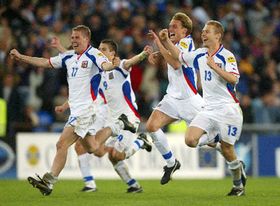 Czech Republic's Under 21 team, photo: CTK The big story today - the Czech Republic's Under 21 team have won the European Under 21 Championships for the first time ever. Few had expected the Czechs to beat France in the final, but they weren't counting on one man - giant Czech keeper Petr Cech, who played the game of his life in Basel on Tuesday night. Cech made several brilliant saves to prevent the French from capitalising on their superiority during the first half hour of the game, when they ran rings around the Czech "lion cubs". And when the 0:0 match ended in penalties, Cech was truly the hero of the hour, saving not one but two penalties to help the Czechs to a historic victory.

And Petr Cech, who was the clear choice for man of the match, had this to say afterwards.

"We believed in ourselves. We said before extra time that whatever happens happens, and that even if we didn't score we'd hold out for penalties. We decided it in the penalties, and I personally believed in myself.

Michal Pospisil scored the golden goal which put the Czechs into the final, and converted a penalty against France. He was still euphoric when he and his teammates arrived home in Prague on Wednesday.

"It's a wonderful feeling, and the highlight of my career so far. There was a super atmosphere throughout the tournament, and a great bunch of lads. All the players played very well and I think we deserved it in the end, even though the French were great. Yeah, a great experience."

In other football news, former Czech international captain Jiri Nemec has agreed a move from German Cup winners Schalke to the Czech club Blsany. Blsany were only able to afford Nemec due to the transfer of their former player Jan Simak from newly-promoted Hanover to Champions League runners up Bayer Leverkusen. The Czech club are to receive 15 per cent of the six-million-euro transfer fee for Simak, who is 23 and was the top scorer in the German second division last season.

And new Sparta Prague coach Josef Jarabinsky evidently means business - his charges are already in training for next season, just three weeks after the last one finished. Jarabinsky says he is not much impressed by what he has seen of the Sparta players so far.

As expected, the Czech Ice Hockey Union has named Slavomir Lener as replacement for Josef Augusta. Lener, who just pipped Alois Hadamczik for the post, was at coach Ivan Hlinka's side when the Czech Republic won the 1998 Winter Olympics in Nagano. He also has several years of NHL coaching experience. I was never a great player, but you don't have to be a good player to be a good coach, said Lener.

In tennis, Jiri Novak was due to play the German Jens Knippschild in the second round of the French Open on Thursday morning. Novak, who is seeded 14th, beat the Russian Mikhail Youzhny 6:3 6:4 7:6 in the first round. Nineteen-year-old Iveta Benesova was the only Czech woman to make it past the first round at Roland Garros, before losing 6:4 1:6 4:6 to Natalie Dechy of France in the second round on Wednesday.