Czech skier Sarka Zahrobska, who is only 17, has caused a major sensation by coming fifth in her first ever World Cup down-hill race, in the new 'knock-out' slalom discipline. Czech swimmers haven't been doing badly either, taking three silvers at the European Short Course Championships. The Czech ice hockey coach has had problems assembling a squad for the Baltic Cup, and Slavia Prague have drawn a Turkish side in the fourth round of the UEFA Cup.

Seventeen-year-old Czech skier Sarka Zahrobska has caused a major sensation. In her first ever World Cup down-hill race Zahrobska came fifth in the new 'knock-out' slalom discipline. She had this to say after the race in Sestriere, Italy.

"I thought I'd finish in the top 30, because that's within my capabilities. I hadn't expected I'd finish fifth after the first day, but given the way this race is organised anything is possible. And when I got into the last nine I knew that if it went well here I could have even made it onto the podium."

Zahrobska's placing was the biggest success in Czech down-hill skiing for an incredible 16 years. The business student is coached by her father, Petr Zahrobsky, and he says it is only a matter of time before his daughter becomes a world champion. 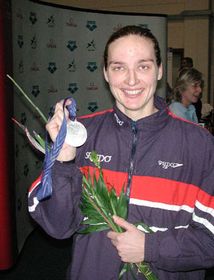 Ilona Hlavackova, photo: CTK The Czech swimming team didn't do badly at the European Short Course Championships in Germany, coming away with three silver medals. After a gold last year, Ilona Hlavackova took two silvers this time out, in the 50 and 100 metres backstroke. Pity Kvetoslav Svoboda too - he was just six tenths of a second away from being crowned European champion for the first time. He was philosophical about coming second.

"Of course it's satisfying winning another medal from the European Championships. After everything I've been through I do have a great feeling of satisfaction, but the end of the race wasn't what it could have been."

The Czech ice hockey coach, Slavomir Lener, is up against it at the moment, with almost 15 of his players unavailable for the Baltic Cup for a variety of reasons. It was only 12 hours before leaving for Moscow that Lener was able to finally name his squad. I'm disappointed but that's life, said the coach. The Czechs' first game is against Sweden on Tuesday.

Slavia draw Greek side for UEFA Cup fourth round 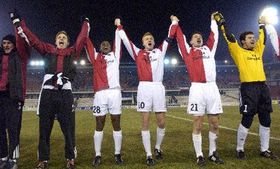 Slavia Prague - PAOK Salonika, photo: CTK Slavia Prague have drawn Turkey's Bestikas in the fourth round of the UEFA Cup, after putting four past PAOK Salonika without reply on Thursday, winning 4:1 on aggregate. Slovan Liberec were knocked out of the competition by another Greek club, Panathinaikos. Liberec have some good news though: one of the mainstays of their championship-winning side last season, Vaclav Kolousek, is now back at the club, after sorting out his difficulties at his former Italian club.

Czech internationals got on score sheets around Europe at the weekend. Man-mountain Jan Koller got two for Borussia Dortmund on Saturday, making an impressive seven goals in the first half of the Bundesliga season. Vratislav Lokvenc got one for Kaiserslautern, Pavel Nedved scored for Juventus and Milan Baros was the talk of England's Premier League on Sunday evening, when he missed a great chance before making amends with a very well-taken goal.