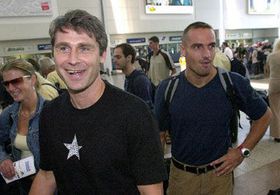 Jan Zelezny and Roman Sebrle at the Ruzyne Airport, photo: CTK The World Athletics Championships, which get underway in Paris on Saturday, will be watched by millions of sports fans around the world - undoubtedly the most important event on the athletics calendar this year. Among the 23-member Czech team there are several medal hopefuls, but none holds a record as impressive as Jan Zelezny's. Often described as the greatest athlete in the history of the javelin, he is already a three-time world champion, taking gold at the last three Olympic Games. However, Zelezny, who is 37, only announced he was definitely going to Paris last weekend, after winning at the Golden League meeting in Zurich. Ian Willoughby asked him why he left the decision so late:

"Last year I had some problems with my back, I had an operation, that's why I didn't like to speak so early before the World Championships. After Zurich I know I'm feeling good, I have a chance to take a medal, that's why I say I'll compete."

You've achieved more than anybody else in the history of your sport. How much motivation do you still have?

"I have motivation because I like sport, I still know I have a chance, and that's my motivation."

Is it the case that all your preparations this year are aiming towards the Olympics next year in Athens?

"Yes, this year for me is preparation for next year. The Olympic Games is everything for me, and that's why I've prepared a little bit differently this year than last year. What I would like would be for next year to be my best year."

Will next year be your last year?

"I don't know. It's very difficult to say now, maybe yes, maybe no. If I compete very well at the Olympic Games that'll maybe be the end."

Jan Zelezny is of course not the only Czech hoping to take a medal at the World Championships. Watch out for 18-year-old Jaroslav Baba in the high-jump, Jiri Muzik in the 400 metre hurdles, Vera Pospisilova in the discus and of course decathlete Roman Sebrle. Sebrle holds the world points record and is the current European champion in the decathlon. Ian Willoughby asked him if he was aiming for the highest spot on the podium.

"Yes, of course I want to go for gold, because the preparation was good and I feel very good and I want to win gold."

This weekend you're going to Paris for the World Championships, next year is the Olympics in Athens, which is the bigger tournament for you?

"Of course Athens is the Olympic Games, I think about it all the time...but now I have six days before (my event in) the World Championships and I don't think about Athens, I only think about Paris."

The Czech team was originally to have had 24 members. However, shot putter Vladimir Maska injured his ankle during last-minute training before leaving for Paris and had to be taken to hospital. It was too late to register a replacement for Maska. 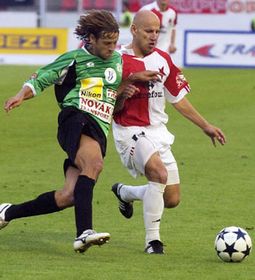 Ondrej Herzan (Jablonec) - Patrik Gedeon (Slavia Prague), photo: CTK The Czech-born golfer Alex Cejka has achieved the greatest success of his career at Grand Slam level, coming fourth in the USPGA Championship at the Oak Hill club in New York state. Cejka, who escaped to Germany from communist Czechoslovakia with his father at the age of nine, has had the best season of his career in terms of earnings, with the 288,000 dollars he won at Oak Hill bringing his total winnings this year to over a million dollars.

Slavia Prague's footballers continued their poor run when they drew 0-0 with Jablonec on Thursday; Jablonec have proven something of a bogey team for the Prague club, who haven't beaten them in five consecutive games. Not the best preparation for next week's Champions League qualifier against Celta Vigo in Prague; Slavia trail 3:0 from the first leg.

The top scorer in the Czech football league last year, Jiri Kowalik, was booted out by Synot this week, after a pay dispute with the club's management. Kowalik was sacked on the spot and ordered to remove his possessions from the club's changing rooms. Midfielder Tomas Polach also got his marching orders, as did coach Radek Rabusic. Synot have picked up only one point in four games so far this season.