We begin today with athletics, and the World Championships in Paris. There have been no Czech successes to report so far, I'm afraid. Triple-jumper Sarka Kasparkova, who took gold at the 1997 World Championships in Athens, was suffering back problems before the competition and only decided to go at the last minute. That's a decision she may now be regretting, after failing to reach the final. Kasparkova, who is 32, said in one interview that if the Olympics weren't on next year she'd be tempted to hang up her spikes now.

On Monday afternoon all eyes will be on Jaroslav Baba in the high jump and Vera Pospisilova in the discus. Baba, who is 18 and the European junior champion, said he was happy to have reached the final in Paris and would be satisfied with a place in the top eight. Pospisilova - one of the leading athletes in her discipline - will be hoping to do better than that. Viktoria Zizkov - Banik Ostrava, photo: CTK While all the talk before the season began was about the Prague clubs Sparta and Slavia, who came first and second last season, it's clubs from Moravia who are now setting the pace. Banik Ostrava are in first place with 13 points from five games, ahead of Brno who have a game in hand and have yet to drop a point. On Saturday Ostrava beat Viktoria Zizkov in Prague 2:1, with both goals coming from Marek Heinz, making it five in five games for the striker. Heinz is like a man reborn: after an unsuccessful three-year stint in the Bundesliga, the 25-year-old is playing some of the best football of his career. Elsewhere Sparta Prague were held to a 1:1 draw by Olomouc, with the Moravians getting a last minute goal in time added on. By the way, there is talk of Sparta signing Teplice's former Czech international midfielder Pavel Horvath, if they beat Vardar Skopje this week and reach the Champions League. 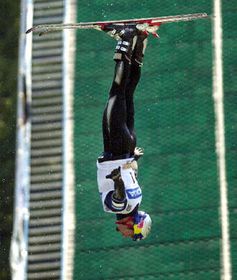 Ales Valenta, photo: CTK The acrobatic ski jumper Ales Valenta has demonstrated his new jump - which he calls the "icy breath" - in competition for the first time, using it to win at a World Cup competition in Stity, north Moravia on Saturday. The "icy breath" is a new version of the jump which secured gold for Valenta at the Winter Olympics in Salt Lake City. In summer he and his ski-jumping rivals perform their twists and turns on dry slopes before landing in water.

Czech tennis players hoping to make impact at US Open

The last tennis Grand Slam of the season, the US Open, gets underway in Flushing Meadows today. Among the Czechs taking part the 10th seeded Jiri Novak faces Mario Ancic of Croatia in the first round, Radek Stepanek plays Spain's Fernando Lopez. As for the women, Daja Bedanova - who is still Czech, though she is applying for German citizenship - plays Italy's Maria Elena Camerin while Denisa Chladkova takes on another Italian, Adriana Serra Zanetti.