Navratilova defeated in last game ever at Australian Open 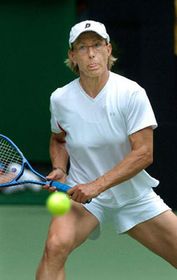 Martina Navratilova, photo: CTK Martina Navratilova's last ever match at tennis's Australian Open ended in defeat in the mixed doubles final on Sunday. Czech-born Navratilova and her partner Leander Paes, who won in Melbourne last year, were beaten 6-1 7-6 by Elena Bovina and Nemad Zimonjic. Navratilova, who is 47, plans to compete in the remaining three Grand Slam events this year; she is also expected to represent the United States at the Olympic Games in Athens, before finally retiring for good. The player will forever be a tennis legend, having won 167 singles titles and 173 in doubles, including an amazing 58 Grand Slam titles.

Another Czech sporting great, ice hockey forward Jaromir Jagr, played his 1,000th NHL game on Friday, though the game could have gone better for the famous no. 68: his new club the New York Rangers were beaten 3:1 at Madison Square Garden by Buffalo, with the home fans booing another poor performance. By the way, Jagr could set the Czech record for NHL appearances: he is not far behind the record of 1,028 games set by Petr Svoboda.

In the Czech Extraliga, goalie Roman Malek had the perfect revenge on his old club Slavia on Saturday, helping his new team Pilsen to a 5:0 win over the Prague side. Malek was recently unceremoniously booted out of Slavia after five years at the club. Elsewhere in the Extraliga, Pardubice are still way out in front - 21 points in front, to be precise - after beating Sparta 3:0. However, as the play-offs get near, attention is focusing on the middle of the 14-team table. Kladno are in the final play-off place, eighth, after beating Litvinov, who are six points behind in 10th place.

Stajner to Sparta for spring season, mixed fortunes for Czechs in Bundesliga

Jiri Stajner Czech international striker Jiri Stajner is joining Sparta Prague on loan from Hanover for the rest of the season; the move could become permanent in the summer. Stajner says he is looking forward to playing better football than he managed in Germany and playing for Sparta in the Champions League. Another forward on the fringes of the Czech national team, Vratislav Lokvenc, ended a long run without a goal on Saturday: his strike for Kaiserslautern was his first club goal since last March. Meanwhile, Borussia Dortmund's Czech pair of Jan Koller and Tomas Rosicky had a nightmare start to the spring season on Friday, with Koller missing a penalty and Rosicky getting sent off as Dortmund lost 1:0 to fierce rivals Schalke.

Roman Sebrle He has set the world decathlon points record, and he has been voted the best looking man in the Czech Republic, but Roman Sebrle had a rather less pleasant experience recently during training in the Canary Islands, when he was taken into police custody. His crime: playing nohejbal, a game in which a football is kicked to and fro over a net on a tennis court. The police were called when Sebrle set up a nohejbal court on a running track in the stadium where he was training. After a few hours of questioning the decathlete was released. He has described the experience as funny, absurd and sad at the same time.