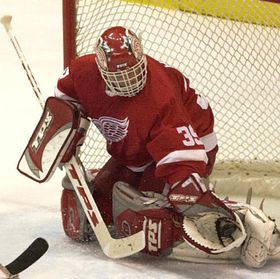 Dominik Hasek, photo: CTK Veteran ice hockey goaltender Dominik Hasek created quite a sensation when he returned to the game at the beginning of the season, a year after retiring. However, his comeback at the NHL's Detroit Red Rings didn't go according to plan and after just 14 games he was hit by a groin injury. Speculation about his future came to an end on Tuesday, when a tired looking Dominator told journalists he would not be playing again this season.

"My groin...it cannot handle it. I just...it's very sad but that's the way it is. I hoped for two months it would get better, but it didn't get better, it got worse last week."

The question many people are asking is whether Dominik Hasek, who recently turned 39, will ever play again. For his part, one of the greatest Czech players of all time says he fully believes he will be back next season. Detroit's management, meanwhile, have indicated that Hasek does not figure in their plans.

The website www.hockeyzoneplus.com has published a list of the all time highest earners in the NHL. Leading the table with a whopping 75 million dollars is Czech forward Jaromir Jagr. Jagr, who recently joined the New York Rangers, has been playing in the league since 1990.

As the Czech domestic football league gears up for the start of the spring season on Saturday, with second-placed Sparta hoping to close a seven-point gap on leaders Ostrava, national coach Karel Brueckner has been announcing his squad to play Italy in a friendly next week. Though Milan Baros is expected to be in Liverpool's squad on Saturday for the first time since breaking his ankle in September he has not been called up. Also unavailable are Smicer, Ujfalusi and Grygera. The current Czech team have not been beaten in 19 games; the Czech (or Czechoslovak) record is 22.

The promising young Czech high-jumper Jaroslav Baba confirmed his great form of late with a jump of 232 centimetres in Weinheim, Germany on Wednesday, a record for that venue. Baba, who is 19, came seventh at the World Athletics Championships last year and should be a name to watch at this summer's Olympics.

Championships After becoming world biathlon champion last March, the Czech Republic's Katerina Holubcova came back to earth with a bump in Germany's Oberhof this week, when she finished in 52nd place, her worst ever at her sport's World Championships. Holubcova, who has become well known in the Czech Republic since last year's win, said after Tuesday's event that you need luck in sport and perhaps she'd be lucky again some day.