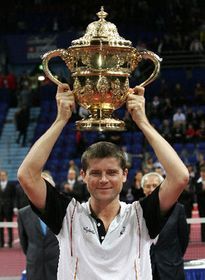 Jiri Novak, photo: CTK Just three weeks after winning the sixth tournament of his career in Tokyo, Czech tennis number one Jiri Novak has done it again! On Sunday the 29-year-old beat David Nalbadien of Argentina in a five-set epic to win the final of the Swiss Indoors in Basil, and was presented with the biggest cheque of his career - almost 150,000 euros. "It was a fantastic success. I'm back on top now," Novak said afterwards. He now moves on from Basil to Paris for the Masters and the last tournament of what has been a very successful season - it's hard to imagine just a month ago there was talk of Jiri Novak retiring at the end of the year. Sparta Praha - Sigma Olomouc, photo: CTK With Banik Ostrava a shadow of the team which won the league last season and Slavia in the doldrums, Sigma Olomouc have emerged as the biggest challenge to Sparta Prague, the club which has dominated Czech football for the last decade. Olomouc visited the league leaders on Saturday hoping to close the gap at the top of the table but went home empty-handed; a 2:0 win for Sparta putting them seven points clear of the Moravians. The highlight of the game was the second goal, an absolute wonder strike from Lukas Zelenka.

Fingers crossed Sparta can maintain that form when they visit Manchester United in the Champions League on Wednesday - don't forget they came close to beating the English giants a few weeks ago.

The loser of the weekend in Czech football has to be Jan Baranek of Opava, who shot into an empty net against Ceske Budejovice and ran off to celebrate. But the ball hadn't actually crossed the line, having got stuck in mud in the goalmouth, from where a defender collected it and continued play. Poor Baranek will be having nightmares about that one for a while!

Sparta ice hockey club are also doing well these days, leading the Extraliga by three points after the latest round of games in which they beat Litvinov 2:1 in Prague. Second are Zlin, followed by Slavia.

Jagr supports Civic Democrats, has no plans to go into politics himself 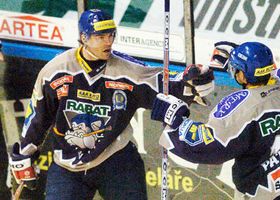 Jaromir Jagr, photo: CTK The biggest star in the Extraliga Jaromir Jagr draws the crowds wherever he plays for Kladno. Now Jagr is making the news for his activities off the ice, appearing on billboards supporting the Civic Democrats in the upcoming elections. He also appeared on a TV debate programme supporting one of the party's candidates. But Jagr, who is 32, says he has no plans to enter politics himself when he retires from hockey.