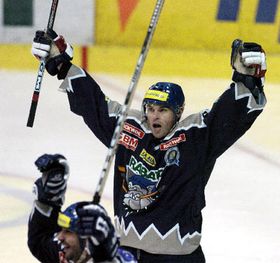 Jaromir Jagr, photo: CTK Star forward Jaromir Jagr, one of the best Czech hockey players of all time, has played his last game for the Czech Extraliga hockey league, a 5-4 thrilling victory for his home team Kladno over Liberec on Friday. Like so many NHL players Jagr has been playing in Europe for the duration of the NHL labour dispute - but, he has now signed to play in the Russian Superleague with Russian champions Avangard Omsk, who play 2 500 kilometres east of Moscow! However, Omsk is struggling this year in 12th position and it is hoped Jagr - who will become the best-paid player in the Russian league - will bring additional firepower to the team.

Everything should work out nicely if Jagr is able to build on even a fraction of his recent perfomances in the Czech league: the winger scored 11 times and combined for 17 assists in just 17 games. At 32 Jagr is clearly still on top of his game. 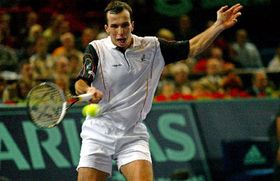 Radek Stepanek, photo: CTK In tennis, Radek Stepanek missed his first chance to win an ATP title on Sunday at the prestigious Paris Masters. The rising young Czech fizzled out against two-time winner Marat Safin of Russia, who won in three sets 6-3, 7-6, 6-3. Unforced errors were the difference in the match with Stepanek making 48 to Safin's mere 18. Even so, for a time it looked like Stepanek might take control of the 2nd set, with chances for two break points at 4:2, which regrettably he missed.

Despite the loss, Stepanek is not disappointed; his finals appearance has lifted the previously ranked 62nd in the world to 37th, showing his career is indeed heading in the right direction.

Can anyone stop Sparta Prague, continuing to dominate in the autumn season in the Czech football league? Sparta remains undefeated in eighteen games ahead of Monday's match-up with Mlada Boleslav but Teplice are drawing close, just three points off the league leaders, helped by a 2:0 win over Pribram at the weekend. With traditional rivals Slavia struggling in 6th place, and Olomouc seven points off the mark, Teplice seem the only serious contender against Sparta for the autumn lead.

In other notable football news, Czech goalie Petr Cech kept yet another clean-sheet in the English Premiership - his 9th this season so far. The impressive 22-year-old helped his side Chelsea to down Everton 1:0, allowing Chelsea to take top spot of the Premier League, two points over nearest rivals Arsenal.