Roman Sebrle, photo: CTK And the Czech Sportsperson of the Year is...Roman Sebrle! Sebrle took the prestigious award for the first time at a glitzy ceremony in Prague on Saturday evening, capping a year to remember for the 30-year-old: he took gold in the decathlon at the Athens Olympics, as well as winning the decathlon Grand Prix and the heptathlon at the Indoor World Championships.

Second in the poll of Czech sports journalists was footballer Milan Baros, who was top scorer at Euro 2004. He was followed by Jaroslav Baba, the young high-jumper who took bronze in Athens. The collective sport category was won by the Czech football team, represented by Tomas Rosicky.

The most moving moment at Saturday's ceremony was the presentation of the Emil Zatopek Sporting Legend award; Zatopek's widow Dana Zatopkova gave it to Libena Hlinkova, herself the widow of Ivan Hlinka, the Czech ice hockey great who tragically died in a car crash this year.

Baros on form for Liverpool, Bolf impressing at Auxerre

Getting back to the runner-up in the Sportsperson of the Year award, Milan Baros turned in a man-of-the-match performance for his club Liverpool on Sunday, scoring one goal and setting up another. His Czech international team-mate Rene Bolf also scored, for France's Auxerre; the defender has apparently been a big success at the club since joining them in the summer. Frantisek Straka, photo: CTK Frantisek Straka, who was dismissed as manager of Sparta Prague last week, says he will sue the newspaper Mlada fronta Dnes for reporting Friday that there were rumours he was fired for taking cocaine. Straka says he will fight hard to clear his name. Though the club did poorly in the Champions League, Sparta are nine points ahead in the Czech first division. His unexpected dismissal surely says a lot about the priorities of the big money club. 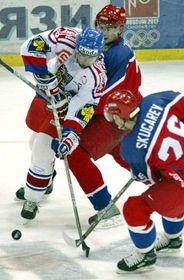 Photo: CTK The Czech ice hockey team came third in the Rosno Cup in Moscow at the weekend. After beating Sweden in their first game, they lost to Finland and hosts Russia. Those results leave the Czechs in third place in the four-nation Euro Hockey Tour. The Rosno Cup was Radim Rulik's first outing as main coach of the Czech team. Rulik said he was impressed by his players' offensive play, but rued a lack of preparation for power plays.

Meanwhile, Czech captain Tomas Kaberle, voted the best defender at the Moscow tournament, says some Russian teams have expressed interest in signing him but most likely he will be remaining at Kladno in the Czech league. 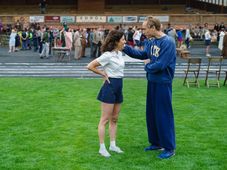