Vaclav Prospal scores the first goal, photo: CTK Ice hockey is the sport dominating the headlines in the Czech Republic these days, with the country's team hoping to bring back gold from the sport's 69th World Championships, which began in Vienna on Saturday. Czech fans have snapped up thousands of tickets, taking advantage of the nearness of this year's Championships, and on Sunday created a real "home" atmosphere in the Austrian capital. And they were not disappointed by their team's opening game, with the Czech Republic beating Switzerland 3:1. All three goals came in power plays, with the scorers Vaclav Prospal, Jaromir Jagr and Frantisek Kaberle. Goaltender Tomas Vokoun also impressed. Less impressive, however, was the state of the ice, as Czech coach Vladimir Ruzickca complained after the game.

"In the first period the ice was OK, but in the second and third periods there seemed to be a lot of water, and neither the puck nor the players were able to move around normally. The game started at a good tempo, which suited us, but after that we were pretty much playing on water."

The Czech Republic's next match is against Germany on Tuesday, with a game versus Kazakhstan to follow two days later.

Tuesday should also see Czech goalkeeper Petr Cech lining up against his international team-mate Milan Baros, as their clubs Chelsea and Liverpool face each other in the semi-finals of football's Champions League. But whatever the outcome, Petr Cech already has a lot to celebrate, with Chelsea having just won the English Premiership, the first league title of the young goalie's career. Chelsea captain John Terry paid high tribute to the record-breaking goalkeeper, saying Cech had been the hero of the season at the club. And Petr Cech wasn't the only Czech celebrating: Jiri Jarosik also receives a Premiership medal, after joining Chelsea in January. He has now won the league in three different countries. 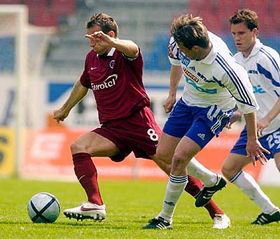 Sparta Prague - Olomouc, photo: CTK Jarosik's old club Sparta Prague beat Olomouc 2:0 on Saturday, and will be crowned champions if second-placed Teplice fail to beat Slavia in Prague on Monday evening. But it will be a strange triumph for Sparta; they have been frequently criticised for their style of play, and the club's fans have not taken to manager Jaroslav Hrebik, who was installed during the winter break. 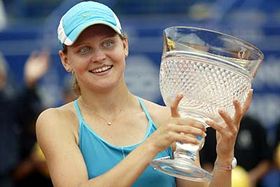 Lucie Safarova, photo: CTK Czech Lucie Safarova won tennis's Estoril Open in Portugal on Sunday, overcoming fourth seed Li Na of China 6-7 6-4 6-3. Safarova, who reached the competition as a qualifier, should move up around 50 places in the world rankings; before the tournament she was ranked 155th.