In Sports News: the Czechs get off to a poor start at the World Athletics Championships, but Cechlova-Pospisilova and Sebrle are hopeful of medals in the next few days; ice hockey star Hejduk extends his contract at Colorado; Sparta Prague begin the new football season with a win, while Slavia drop two points at home; and American basketball player Maurice Whitfield makes his debut for the Czech Republic.

Poor start for Czechs in Helsinki, but Cechlova-Pospisilova confident in discus 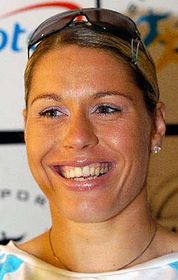 Vera Cechlova-Pospisilova, photo: CTK The World Athletics Championships in Helsinki did not begin well for the Czech Republic, with big names like triple jumper Sarka Kasparkova and hurdler Jiri Muzik going out in the heats on day one. Sunday went better for the Czechs, with medal hopeful Vera Cechlova-Pospisilova qualifying with ease for the discus final - she produced the longest throw of the heats.

"My throwing was a bit chaotic. I wanted to throw in a really relaxed manner, and I think my poor trainer must have been very nervous in the stands. But I went into it thinking I'd really go for it, and wouldn't take qualification for granted."

The final of the women's discus is on Tuesday. 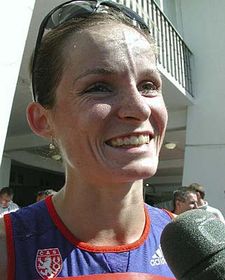 Barbora Dibelkova, photo: CTK Barbora Dibelkova finished fifth in the final of the women's 20 km walk, setting a new Czech record of 1 hour 29 minutes. Dibelkova, who is 175 cm tall but weighs only 52 kg, wasn't far off the medals - just 21 seconds separated her from third place.

Sebrle: less than gold would be disappointing 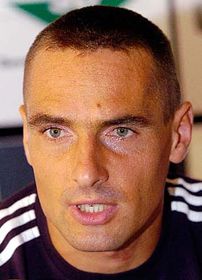 Roman Sebrle, photo: CTK Tuesday sees day one of the men's decathlon, in which Roman Sebrle will be hoping for a repeat of his gold winning-performance at last year's Olympics. He says anything less than first place in Helsinki would be a disappointment.

"It's only sport, and we'll see how it goes. But it's true I'll only be satisfied with gold - I'm first in the world rankings, I won the Olympics, so I can't think about anything less. Of course I want to take the gold."

Czech ice hockey star Milan Hejduk has signed a new contract with the NHL's Colorado Avalanche. Hejduk, who is 29, is set to earn almost 20 million dollars over the next five years at the Denver-based club. During the NHL lockout the forward played for Czech side Pardubice, helping the club to the Extraliga title.

Berdych knocked out in semi-finals in Washington

Upcoming Czech tennis player Tomas Berdych reached the semi-finals at the Leg Mason Classic in Washington on Saturday, only to be beaten 6-4 6-3 by James Blake of the USA. 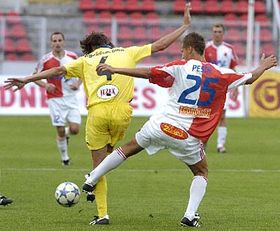 Slavia Prague - Jihlava, photo: CTK The new Czech football season began on Friday, with a 1:1 draw between Slavia Prague and newly promoted Jihlava. Slavia will have to do better if they're to overcome Anderlecht in the last qualifying round for the Champions League; the first leg of that tie takes place in Belgium on Wednesday,.

Last season's Czech champions Sparta Prague got off to an impressive start with a 2:1win over Pilsen. The highlight of that game was a long-distance wonder goal from Karol Kisel; the Slovak midfielder was one of five new signings fielded by Sparta.

American basketball player Maurice Whitfield has played his first games for the Czech Republic since taking out Czech citizenship earlier in the year. Whitfield and his teammates are currently playing friendly matches ahead of the European Basketball Championships, which take place next month.