Vaidisova, Berdych best of the Czechs at US Open 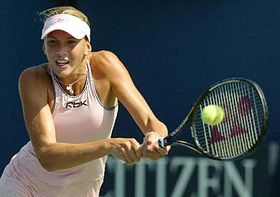 Nicole Vaidisova, photo: CTK Not for the first time in recent years, no Czech tennis players have made it through to the second week of a Grand Slam tournament. Among the women at the US Open in New York, 16-year-old Czech number one Nicole Vaidisova made the biggest impression; she reached the last 16 at a Grand Slam event for the first time, only to be beaten in two sets by Nadia Petrova of Russia.

As for the men, another promising young player Tomas Berdych lasted longest at Flushing Meadows, before being knocked out by local hero Andre Agassi in the third round. The 19-year-old Czech played brilliantly in the first set, winning 6:3 and giving Agassi a real scare. But the American showed his experience as he bounced back to take the next three sets, and the match. Here is Tomas Berdych.

"The match started very well I think; Andre wasn't playing at his best and I was able to take advantage of that. But then he really improved, and on top of that it started to get windy - I just can't play well in windy conditions, and that kind of decided it for me."iiii

Defeat to Romania complicates route to World Cup for Czechs 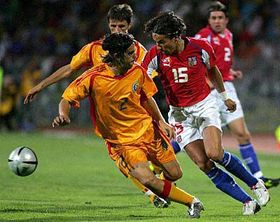 Czech Republic - Romania, photo: CTK The Czech national team's chances of reaching the football World Cup in Germany next year suffered a setback on Saturday, when they were beaten 2:0 away to Romania. The result makes it almost impossible for the Czechs to win Group 1, and increases the likelihood they will have to take part in playoffs, that is assuming they manage to come second.

The manner of Saturday's defeat was far from encouraging, with Karel Bruckner's team run ragged by the Romanians. They created few chances and failed to control the ball in midfield in the absence of Tomas Rosicky and captain Tomas Galasek. As for the back four, the less said the better.

And the number of players injured ahead of Wednesday's home qualifier against Armenia is astounding: Baros, Cech, Polak, Jankulovski, Bolf and the aforementioned Rosicky and Galasek are all either ruled out or doubtful. The Czech doctor says he does not remember such a "sick list" in his ten years with the team.

Two medals for Czechs at World Rowing Championships in Japan

The Czech Republic has taken two medals at the World Rowing Championships in Gifu, Japan. Miroslava Knapkova took silver in the women's single skull, her first medal from a major tournament, while Ondrej Synek came third in the men's single skull. And the great Vaclav Chalupa, who is now 37, was a member of the Czech team which came fourth in the men's quadruple skulls.

The Czech ice hockey team came a poor third in the Ceska pojistovna Cup in Liberec. The Czechs got off to a winning start in their first game under coach Alois Hadamcik, beating Finland 2:1 on Thursday, before losing to both Sweden and Russia.