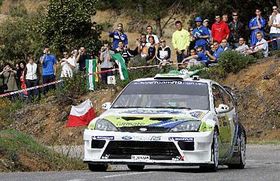 Roman Kresta, photo: CTK The Czech rally driver Roman Kresta is on a roll these days: after finishing a career-best fifth in Corsica the weekend before last, the Ford driver again came fifth on Sunday in the Rally of Catalunya. Speaking after the penultimate race of this year's World Rally Championship, Kresta said he was content enough, but things could have gone better.

"I'm satisfied, of course. But, that said, I'm not totally satisfied with the result because I made a mistake in the choice of tyres, and that cost us at least a minute. Except for that we would have come third. It could have been better, but that's the way rallies go, unfortunately, that's the way it is."

Roman Kresta wasn't the only Czech who did well on Sunday - Jan Kopecky finished eighth in Catalunya in a Skoda.

Crisis at Sparta Prague continues with home defeat to Olomouc

The crisis at Sparta Prague continues. Last season's football league champions are currently closer to relegation than winning the title: they're in tenth place after losing 2:1 at home to Olomouc on Saturday. Sparta's only goal came six minutes from time, a penalty scored by this man, Miroslav Matusovic.

"We're always saying in the changing room that we have to change things, but then it turns out to be just talk once we get on the pitch. At the same time we started today's game well - at one point I came close but then immediately afterwards they got a goal from a centre. It was as if we just ground to a halt."

And Sparta will have a very tough challenge on Wednesday, when they take on Arsenal at Highbury in the Champions League. On Thursday Slavia Prague entertain CSKA Sofia in the UEFA Cup.

In the Czech league Liberec are two points clear at the top of table after beating Pilsen 2:0 at the weekend. Teplice are second after drawing 1:1 with Slovacko.

There is a question mark over whether star striker Milan Baros will be available for World Cup play-offs against Norway in mid-November. He has made few appearances for Aston Villa since joining the club in the summer, and manager David O'Leary was angry when the player aggravated an injury by appearing for the Czech national team.

Baros says if he is not fit to play next weekend Villa may not allow him to take part in the play-offs. But O'Leary says he has no power to stop him - the rules state clubs must free players for international duty. 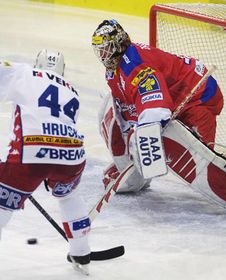 David Hruska from Slavia Prague (left) and Roman Turek from Ceske Budejovice (right), photo: CTK Slavia Prague continue to lead the Extraliga table by nine points. They came from behind to beat Ceske Budejovice 5:2 in the 20th round on Sunday. Liberec jumped into second place after overcoming Vitkovice 4:3, while Zlin dropped to third after losing 5:1 to Karlovy Vary.