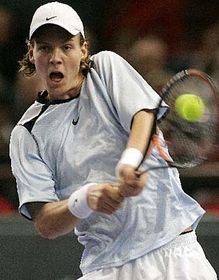 Czech tennis-player Tomas Berdych, photo: CTK The 20-year-old Czech tennis player Tomas Berdych defied his ranking at fiftieth in the world on Sunday, when he beat sixth seed and world number 10 Ivan Ljubicic in the final of the Paris Masters. The thrilling five-setter was the climax of a tournament which saw the youthful and taciturn Czech knock out four seeds on the way. He is the second youngest player ever to win the tournament - after Boris Becker in 1986.

Interestingly he is one of only two players to have posted victories over both Roger Federer and Rafael Nadal in the last two seasons. The other is Slovakia's Dominik Hrbaty.

And staying with tennis, the 16-year-old Czech teenage wonder in the women's game, Nicole Vaidisova, ended her 18-match unbeaten run on Saturday, when she was defeated by defending champion Amelie Mauresmo in the semis of the Advanta Championships in Philadelphia. It was a closely fought match, with both women struggling to break serve, but in the end it was the strength of the older Frenchwoman that wore down her Czech opponent. Despite defeat, Vaidisova is the only player to have won in three consecutive tournaments on the WTA Tour this season. 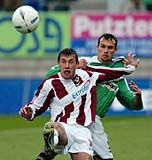 Miroslav Slepicka from Sparta Prague (left) and Petr Smisek from Jablonec, photo: CTK Over to football now, and Sparta Prague's agony continues. Over the weekend they managed to lose again, this time against Jablonec, the sixth defeat in their last seven Gambrinus Liga games. It leaves last season's champions languishing in the lower half of the league table, this coming hot on the heals of their 3-0 defeat by Arsenal at Highbury on Wednesday, that left them at the bottom of their Champion's League group, with just one point from four games. Sparta can take some consolation from the fact that they were more than a little unlucky against Jablonec, but as trainer Stanislav Griga pointed out after the game, they lack a quality striker and consistently fail to convert their chances.

Petr Franek, the goal tender of Slavia Prague, photo: CTK Elsewhere in the Gambrinus Liga, the battle for the top spot continues between North Bohemian near neighbours Liberec and Teplice, although Teplice's unexpected 2-0 defeat by Banik Ostrava at the weekend, did give Liberec some breathing space at the top, two points ahead going into Monday's game against Pribram.

Over to ice hockey now and there were some surprises in the Extraliga on Sunday. Vsetin, trailing in last place and with only one victory under their belt so far this season, managed to hold third place Vitkovice to a 1-1 draw, and league leaders Slavia suffered a humiliating 4-0 defeat at home at Prague's Sazka Arena against another of the league's weakest teams Trinec. Slavia had an amazing start to the season, hardly losing a point in their first twenty games, but they've now managed to lose three games in a row, two of them at home, and their performance against Trinec was probably their worst of the season so far. The league has now gone into a ten-day break, and Slavia will certainly be relieved to gain a bit of breathing space.

Jagr continues to shine in NHL

Petr Prucha (left) and Jaromir Jagr, photo: CTK And finally Czech ice hockey star Jaromir Jagr continues to shine for New York Rangers in the North American NHL. In Saturday's derby against New Jersey, he may not have scored, but his pass to fellow Czech team mate, Petr Prucha towards the end of the second period, helped Rangers on their way to a 3-2 victory, and this means that Kladno's famous sporting son has now scored or assisted in twelve games in a row. Jagr is certainly proving that his detractors were wide of the mark, when they predicted that, at 33, his star was beginning to fade. He's currently the NHL's seventh most productive player.