In Sports News: decathlete Roman Sebrle is named Czech Athlete of the Season for the fourth year in a row, after finishing second this year at the World Championships; cross country skier Katerina Neumannova begins this "Olympic" season in fifth place; Liberec knock Slavia Prague off the top of the Czech ice hockey league; and footballer Milan Baros nets his first goal in two months. 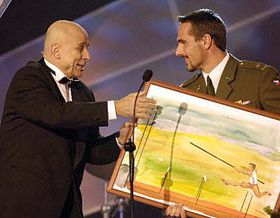 "The season wasn't quite what it could have been, even though I did succeed in timing it so I was in my best form of the whole year at the time of the World Championships. But then again, I had health problems for almost three months before that, so in the end I guess I can be satisfied with silver."

Second in the Athlete of the Year poll was discus thrower Vera Cechlova-Pospisilova, while the young high jumper Jaroslav Baba - who set a new Czech record this season - was third.

Katerina Neumannova has begun her season with fifth place in a World Cup event in Beitostulen, Norway. The Czech cross country skiing great, who is 32, was a mere 5.4 seconds outside the medals in the 10 km classic. Let's hope Neumannova's season reaches a climax during the Winter Olympics; they take place in Turin in February.

After a full three months at the top of ice hockey's Extraliga Slavia Prague been overtaken by the Liberec Bili Tygri (White Tigers), who took full points from their two games at the weekend. Goaltender Milan Hnilicka said leading the table was very pleasant indeed, but added that the team would now have to concentrate on the more important second half of the season. 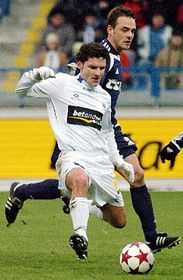 Slavia Prague vs. Slovan Liberec, photo: CTK It must be a great time to be a Liberec sports fan - the town's football team, Slovan Liberec, are also leading the league. They played host to Slavia Prague on Saturday but had to settle for one point, after Slavia came from 3:1 down to even the score in the final minute of one of the games of the season.

Sparta Prague, meanwhile, won their first game in over a month, beating Mlada Boleslav 4:2. Their big summer signing Miroslav Slepicka (once touted as the new Milan Baros) finally scored his first league goal, while fellow new boy Libor Dosek bagged only his second. On Tuesday the Czech title holders are in Champions League action away to Ajax Amsterdam. 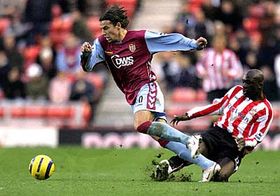 Milan Baros, photo: CTK Ajax's Tomas Galasek - captain of the Czech national team - could see his dream of ending his career in the English Premiership come true: the 32-year-old is reportedly wanted by Manchester City.

Galasek's international team mate Milan Baros scored his first goal in two months on Saturday, putting in a man of the match performance to help Aston Villa to a 3:1 win over Sunderland.

But Baros is still some way behind the leading Czech goal scorer this season, Rudolf Skacel, who on Sunday scored his 11th for Scotland's Hearts. And this is a man who was playing at full back last season!