Janda "rules the world" after second successful weekend in row 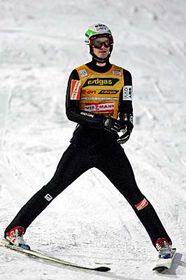 Jakub Janda, photo: CTK "Ski jumper Janda rules the world" is the headline in one of Monday's papers, after - for the second weekend in a row - Jakub Janda topped the podium in a World Cup event on Sunday, this time at Norway's Lillehammer. In another jump a day earlier Janda fell just short of first place and now, two competitions into the season, he leads the table in the World Cup by an impressive 17.5 points.

He'll be hoping his great run continues next weekend, when the venue will be the north Bohemian resort of Harrachov.

"Of course I'm looking forward to Harrachov and performing in front of a home crowd, in front of Czech fans. It'll be difficult but I really hope I'm still wearing the yellow jersey after Harrachov. It's great to be wearing it now - I'm very glad." 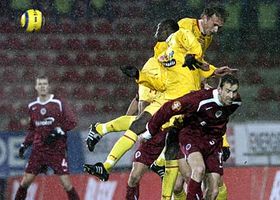 Sparta - Pribram, photo: CTK The tarnished reputation of Czech football was not enhanced by a couple of dubious refereeing decisions at the weekend. Sparta Prague, trailing 1:0 in time added on, were awarded a very questionable penalty against Pribram and duly converted to take one point from the game.

The Pribram player who made a fingers and thumb cash shuffling gesture at the referee will have echoed the thoughts of many.

League leaders Liberec were also awarded a dodgy penalty in their 1:0 win over Zlin.

Meanwhile, the game of the weekend was Slavia Prague's convincing 3:1 away victory over Banik Ostrava. 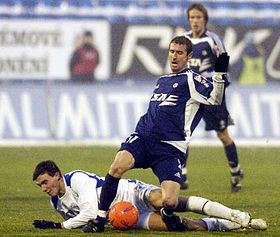 Slavia - Banik Ostrava, photo: CTK While the other teams in the Czech league will be looking forward to starting the winter break after next weekend, Slavia have one more game before Christmas, away to Hamburg in the group stage of the UEFA Cup.

After losing 2:0 at home to Monaco on Thursday, Slavia need at least a draw on December 15th to progress to the knock-out stage.

By the way, Thursday's game was somewhat marred by sustained booing of Monaco's Czech international Jaroslav Plasil by Slavia's fans.

All eyes will be on Liepzig on Friday evening for the draw to decide the groups at next year's World Cup finals in Germany, though there is still some confusion over which "basket" the Czech Republic will be in. Czech fans have had to wait 16 long years to see their team in the World Cup.

Lang injury could prove lucky break for Hudler in NHL

An injury to one Czech ice hockey player could mean a lucky break for another: the NHL's Detroit Redwings have called up the talented young Czech forward Jiri Hudler from the Grand Rapids farm team after it became clear a groin strain sustained by Robert Lang was more serious than first appeared.

Hudler, who is 21, is regarded as one of the best Czech hockey players of his generation, and has made no secret of his frustration at not getting NHL action.