Jaromir Jagr, photo: CTK He may have won every title going in ice hockey, but Jaromir Jagr had never been named Czech Sportsperson of the Year. That is, until Saturday night, when Jagr took the award at a ceremony in Prague, finishing ahead of cross country skier Katerina Neumannova and ski jumper Jakub Janda in a poll of sports journalists. Jaromir Jagr helped the Czech Republic to a great victory in the World Championships in Vienna this year, and is now having a marvellous season with the New York Rangers. He had this to say in a live TV linkup from New York:

"Hockey is a collective sport so if you want to win anything you need team-mates, and they were amazing this season. Without them we wouldn't have won the World Championships and I wouldn't be sitting here."

Cross country skier Neumannova not too disappointed with second place 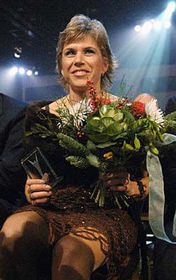 Katerina Neumannova, photo: CTK Only 42 points separated Jaromir Jagr from second-placed Katerina Neumannova, the narrowest margin ever in the poll. But the cross country skier - who became world champion for the first time this year - wasn't too disappointed to miss out on first place:

"Everyone likes to win but this was a bit different - I personally couldn't influence the outcome. But I'm happy that although I came second I wasn't far behind Jagr. He's having a great season, he had a great season last year, and it would be very hard to beat him." 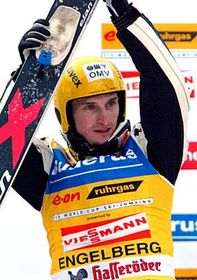 Jakub Janda, photo: CTK Third placed Jakub Janda wasn't at the awards ceremony, as he was competing in a World Cup ski jumping event in Engleberg, Switzerland. And yet again Janda topped the podium, cementing his place at the top of the points table. Incredibly it was his fourth World Cup win since the season began in November.

The collective sport prize at the Sportsperson of the Year awards went to the Czech ice hockey team; they have donated their prize money to team member Jiri Fischer, who is still recovering after suffering a heart seizure in an NHL game last month. Fischer's future is still unclear.

...and suffer whitewash in last tournament before Winter Olympics

The Czech hockey team have returned from a most disappointing Rosno Cup in Moscow: they lost to Finland, Sweden and hosts Russia in the competition, finishing last, and last overall in the Euro Hockey Tour. Their next competition will be the Winter Olympics, which get under way in Turin in mid-February. 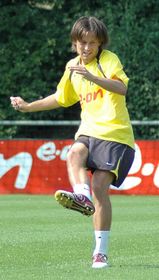 Tomas Rosicky One of England's most successful clubs Arsenal are reportedly very keen to sign Tomas Rosicky from Germany's Borussia Dortmund. The Sunday Mirror said Arsenal's scouts have been watching Rosicky all season, and will make a move for the Czech in January. Just last week there were reports that Athletico Madrid were close to signing the skilful midfielder.

On the domestic front, Czech fans can look forward to that rare thing - seeing a Czech club still in European competition after Christmas: Slavia Prague will face Palermo in the UEFA Cup after qualifying from the group stage last week, despite losing 2:0 to Hamburg in their final game.

Kresta dropped by Ford, will test drive next season

Czech driver Roman Kresta has been dropped from the Ford team for the World Rally Championship, and will be a test driver for Ford next season. Kresta finished eighth in this year's championship.