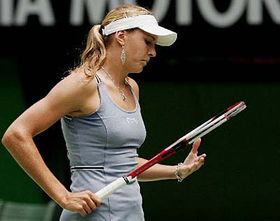 Nicole Vaidisova, photo: CTK The Czechs' last hope in the Women's singles at the Australian Open, 16-year-old rising star Nicole Vaidisova - has had her open run cut short. On Monday the talented Vaidisova committed 34 unforced errors and was easily routed by experienced no. 3 seed, France's Amelie Mauresmo. The 26-year-old Mauresmo, an Australian Open finalist in 1999, downed the Czech in a lopsided 6-1, 6-1. Afterwards, Ms Vaidisova expressed dissatisfaction with her play, saying she had won what she had "expected" to win, but clearly she had hoped for more. On the other hand, having made the last sixteen Ms Vaidisova bested her 3rd round appearance at Melbourne last year by one. Jaromir Jagr (right), photo: CTK Czech players added fuel to wins in NHL ice hockey at the weekend, especially for Jaromir Jagr's New York Rangers, looking for their first play-off spot in just under a decade. On Saturday, New York winger Petr Sykora lifted the Rangers in a shoot-out versus Boston, giving New York the 3-2 win. A day later the Rangers again dominated, this time against New Jersey. David Prucha's power play goal in the 1st started the team in the right direction, and both Jagr and Rucinsky had assists later in the game. In the end, the Rangers downed the Devils 3-1. Prucha's goal was his 24th this season. 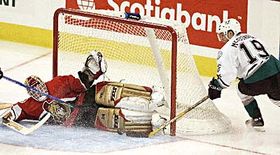 Dominik Hasek, photo: CTK Elsewhere in NHL hockey action, Ottawa Senator Dominik Hasek again proved he's in top form ahead of the Winter Olympic Games. On Saturday the "Dominator" - nominated along with Tomas Vokoun for the Czech National team - stoned the Toronto Maple Leafs 7-0, stopping 23 shots for the 67th shut-out of his career. On the night the Senators romped over Toronto with a total of seven goals. The Czechs' national roster for the upcoming Olympic Winter Games in Turin, Italy, can boast the most Czech athletes at the winter games ever: 82. Four more than competed at Salt Lake City in 2002. Czechs are hoping to do well in an array of different sports in Turin, with the Games starting on February 10th. Besides ice hockey, where Czech bookmakers have ranked the Czech team 2nd only to Canada, Czechs will hope to do well in cross-country skiing with Katerina Neumannova, in ski jumping with Jakub Janda fresh off his Four Hills win, and in aerial skiing with Ales Valenta hoping to repeat gold from Salt Lake City. His gold medal was the only one the Czechs brought home last time around, in 2002.