In Sports News: Roman Sebrle takes bronze in the heptathlon at the World Indoor Athletics Championships in Moscow; ski jumper Jakub Janda is extremely close to taking an historic World Cup title, while cross-country skier Katerina Neumannova comes second in her second-last meeting of the season; Liberec lose, and lose goaltender Milan Hnilicka, in their opening game in ice hockey's Extraliga playoffs; and Slovan Liberec forge further ahead in the Czech football league. Roman Sebrle, photo: CTK The Czech Republic took just one medal at the World Indoor Athletics Championships in Moscow, bronze for Roman Sebrle in the heptathlon. The event was expected to be a contest between Sebrle, the defending champion, and his biggest rival, Bryan Clay of the United States. In the end, however, both were eclipsed by Andre Niklaus of Germany, who finished five points ahead of Clay and 31 ahead of the Czech. Sebrle's coach Dalibor Kupka said given the circumstances he wasn't dissatisfied.

"Before the championships Roman was ill, and he had considered pulling out. The way it turned out in the end he could have had a shot at the silver, but it didn't work out in terms of tactics. But we took the bronze, so I'm satisfied." 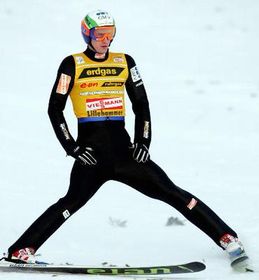 Jakub Janda, photo: CTK Czech ski jumper Jakub Janda is now very close indeed to an historic World Cup victory, after finishing fifth in Norway's Holmenkollen at the weekend. With just two competitions to go this season, Janda is now 175 points ahead of his closest rival, Finland's Janne Ahonen. Even if Ahonen wins both events in Slovenia next weekend, the Czech just needs to come 17th to hold on to overall first place. A first World Cup title could go some way to making up for Janda's disastrous showing at the Turin Winter Olympics. 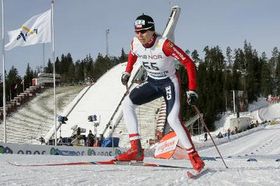 Katerina Neumannova, photo: CTK Cross-country skier Katerina Neumannova, by contrast, had a wonderful Olympics, winning her first gold medal. She was also in action in Norway, finishing second in the 30 km freestyle. After Saturday's race Neumannova rushed to Prague for a television awards ceremony, where she won a special prize for "most repeated programme": that was of course footage of her brilliant Olympic win. 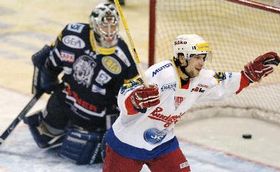 Liberec vs. Ceske Budejovice, photo: CTK The Czech Extraliga playoffs have just begun. In their opening game, Liberec, who topped the ice hockey league in the regular season, were beaten 2:1 at home by Ceske Budejovice, who just made the cut, in eighth. Worryingly for Liberec, star goaltender Milan Hnilicka was taken off injured in the first period of that game.

Elsewhere, Slavia Prague started the playoffs well, coming back from 2:0 down to beat Trinec 5:3 in the capital.

In the other two playoff series, Sparta Prague are due to face Zlin, while Znojmo take on Vitkovice.

...while Liberec football team continue to forge ahead 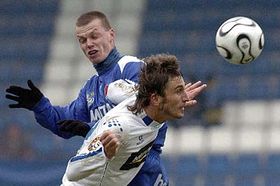 Slovan Liberec vs. Banik Ostrava, photo: CTK Czech league football leaders Slovan Liberec continued to pull away from the pack with a 1:0 win over Ostrava on Saturday. Second-placed Teplice fought back from 3:0 down to draw 3:3 with Plzen; that result leaves them nine points behind Liberec. Slavia Prague are third with a game in hand: their tie against Zlin was one of three Czech league games abandoned due to the weekend's bad weather.