Lukas Pesek has become the first Czech to reach the podium in a motorcycling Grand Prix for 35 long years. After taking pole position in Friday's heats in the 125 cc category, Pesek - just 20 years old - finished second in Sunday's race at Spain's Jerez. The Czech's previous best placing was sixth. Lukas Pesek, who races for the Derbi team, had this to say after the race.

"I had a great start, in fact I couldn't believe how well the start went. Then I concentrated on sticking close to the leader, Alvaro Bautista. I was waiting for the end and hoping I could attack, but in the middle of the race my rear brake stopped working, and I had to slow down and finish in second, which is still a great result - I was just praying I wouldn't be caught from behind." 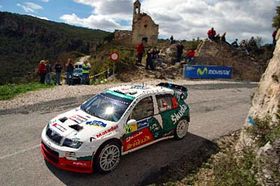 Jan Kopecky's Skoda Fabia, photo: CTK Pesek's wasn't the only Czech success in motorsport at the weekend. Jan Kopecky finished fifth in the Rally of Catalunya. Kopecky, who was driving a Skoda Fabia, equalled the previous best finish by a Czech driver.

Czech speed skater Martina Sablikova has set a new world record. After already notching up seven records in the junior category, Sablikova broke a senior record in her last ever race as a junior on Friday. The 18-year-old made a time of 14:08.28 in the 10-km non-Olympic track category in Canada's Calgary. Last month Sablikova became the youngest Czech flag-bearer at an Olympic Games opening ceremony, before going on to finish a respectable seventh in the 3000m in Turin.

Rosicky shines for Dortmund, club said to have eye on Jarosik 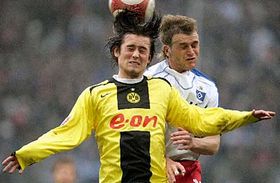 Tomas Rosicky , photo: CTK Czech international football star Tomas Rosicky gave a star performance in Borussia Dortmund's 4:2 defeat of Hamburg on Saturday, scoring two of Dortmund's goals. Rosicky is expected to join Athletico Madrid in the summer. Meanwhile, there have been press reports that Dortmund are interested in signing another Czech midfielder, Jiri Jarosik. He's expected to leave England's Birmingham City if they are relegated. 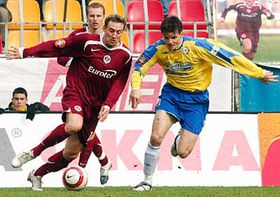 Sparta - Teplice, photo: CTK In the Czech league every weekend seems to bring Liberec another step closer to becoming champions. Their 2:0 win over local rivals Jablonec on Saturday puts them nine points clear of second-placed Teplice, who drew 0:0 with Sparta in Prague. After impressing before the winter break, Teplice have drawn their last five games.

In the Czech ice hockey Extraliga the play-offs have reached the semi-final stage. They begin on Tuesday when Slavia Prague play host to Ceske Budejovice (Budejovice having surprised many by knocking out regular season winners Liberec in the quarter-finals). The other semi-finals pairing sees Znojmo take on Sparta Prague, which opens the intriguing possibility of an all-Prague final.

Czech hockey star Jaromir Jagr is now just one point clear of his nearest rival Joe Thornton in the NHL players points table. In 71 games this season for the New York Rangers Jagr has notched up 51 goals and 56 assists. 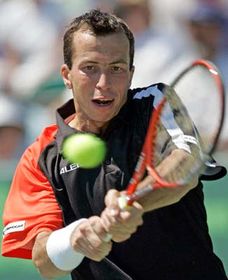 Radek Stepanek, photo: CTK Czech men's tennis number one Radek Stepanek has reached the fourth round at the Nasdaq-100 Open in Miami, after beating Chile's Nicolas Massu 6-7 7-6 7-5. He will now face David Nalbandian of Argentina, who knocked Tomas Berdych out in the third round. Away from the courts, there have been newspaper reports that Stepanek is romantically involved with the Slovak-born tennis star Martina Hingis.