The Czech Republic's Davis Cup team have won a place in September's playoffs for a place in the competition's 16-nation world group, after easily overcoming Morocco in Oudja at the weekend. In fact the Czechs - whose star player was world no. 26 Tomas Berdych - only lost one set against the Moroccans in all five matches. 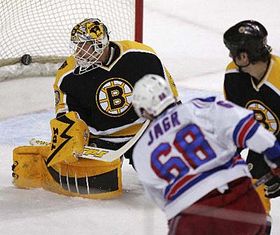 Jaromir Jagr, photo: CTK Czech ice hockey star Jaromir Jagr appears to be heading for his sixth Art Ross Trophy for most productive player in the NHL: after notching up one goal and two assists in New York Rangers 4:3 win over Boston on Sunday, Jagr now has 118 points with five games left before the playoffs.

The Kladno-born forward also set a new club record at Rangers with his 53rd goal of the season. Interestingly he had a goal wrongly attributed to him in the club's previous game against New York Islanders. That would have given him the record earlier, but during the interval Jagr admitted the goal had actually been scored by Czech team-mate Martin Straka. He said he would have been forever plagued by questions about the controversial goal if he hadn't pointed out the mistake.

Leading Czech men's swimmer Kvetoslav Svoboda has made a fine return after a lengthy absence through injury. Svoboda finished fourth in the 200m freestyle at the World Short-course Championships in Shanghai; that was the third best result of his career. 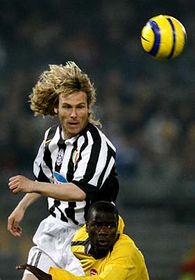 Pavel Nedved, photo: CTK Pavel Nedved has been vocal in recent years about his desire to win club football's biggest prize, the Champions League. But that self-created pressure may have been the Juventus midfielder's undoing in the quarter-final second leg against Arsenal last week, when he was sent off for a second yellow card. Czech football legend Antonin Panenka was critical of Nedved, saying players of his calibre don't commit such rash acts.

Smicer hoping to be fit for World Cup

Nedved's Czech international team-mate Vladimir Smicer says he is hoping to be fit in time for the World Cup in Germany. Smicer, who has suffered from a number of injuries in recent years, hurt his knee while playing for France's Bordeaux in February; the original diagnosis was that he would be out for five weeks, but complications since then have left Smicer aiming for a return in mid-April, just weeks before the end of the season. The midfielder has scored 27 goals in 81 games for the Czech Republic.

In the Czech football league, Milan Ivana's two goals for Slovacko in their 2:0 win over Blsany at the weekend puts him on top of the goal-scoring table. Remarkably, Ivana is the league's top scorer despite only having found the net nine times this season. Hardly Ruud van Nistlerooy, and hardly a good advertisement for the Czech game.