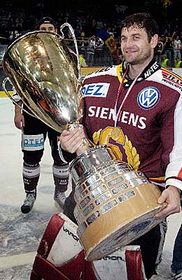 Petr Briza, photo: CTK Czech sport this week was very much dominated by the fight for this year's ice hockey extraliga title. From the very beginning of the season, Sparta Prague were tipped by bookmakers, experts and fans alike as favourites to finish as champions and on Friday evening they emphatically lived up to expectations, despite nearly failing to qualify for the play-offs, clinching the title for the seventh time in their history with a resounding 3-0 victory over local rivals Slavia Prague. Friday's derby was the 6th in the playoff final series, and with stakes set high, the atmosphere in the T-Mobile arena, Sparta's home rink, has rarely been more electric. The game was very much a decider; a victory for Slavia would have kept them in the series, whereas a win for Sparta would seal the title for them. I caught up with Sparta Prague's defender Karel Pilar after the match, who said that tensions had been high going into the game:

"Honestly, it was pretty quiet here. Usually we talk to each other, but before this game it was so quiet here. Each player knew what it was going to be like and what we would have to do." Sparta - Slavia, photo: CTK The first period of the match remained a deadlock between the two teams, and although Slavia seemed to be holding back a little, Sparta remained the stronger side. The first goal came in the 23rd minute, when Richard Stehlik provided Langhammer with a much needed chance to put Sparta on the score sheet. With the deadlock broken, Sparta's game visibly shifted up a gear and just 5 minutes later, Jaroslav Hlinka provided the Spartans with a second. Despite some late surges from Slavia, home goal tender Petr Briza showed some impressive reflex saves to retain his clean sheet. Finally, just a minute before time, Michal Sivek put away a pass from Petr Ton, to really wrap the game up for Sparta. As the final horn sounded, the crowds in the T-Mobile Arena erupted, and the atmosphere was no less ecstatic in the Sparta changing rooms following the match. Here's Pilar's reponse to the resounding victory:

"I feel great now. We won the championship so it feels great, what can I say. I was hoping every minute since the start of the game, and its hard to say."

Friday saw Sparta's home ground filled to capacity, with nearly 14,500 attending the deciding game of the season. Pilar believes that the fans played a major role in the team's campaign for the title:

"They've been great. They were all like sixth players for us, and sometimes I felt a little bit tired but when I heard our fans, they got me going again, so it was a great atmosphere and they helped us a lot."

Slavia fans stood in silence, scarves raised over their heads, as the game came to an end in recognition of their team's valiant stand against the league favourites, but Friday evening and indeed this year's Extraliga season belonged to Sparta.

Elias peaks as Rangers are threatened by Jagr injury 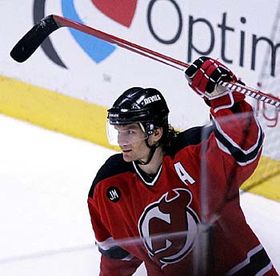 Patrik Elias, photo: CTK In NHL ice hockey news, New Jersey Devils' Patrik Elias knocked up an impressive 6 points on Saturday when his team beat the New York Rangers 6-1 in the first game of their Eastern Conference quarterfinal series. However, this achievement was not enough to steal the limelight from Jaromir Jagr, who suffered an apparent arm injury during the match after he was sent out as a penalty killer by coach Tom Renney. He stretched his arm awkwardly during a lunge at the Devils second leading scorer Scott Gomez, and sustained an injury that may keep him out of the 2nd clash between the two teams in the best of seven series on Monday evening. Since Jagr has had a hand in around 50% of the team's goals this season, this comes as a major blow to Rangers. The team are now on a losing streak which began with a loss to the Devils, and will have to compete in the playoff series against that very same team without their key goal scorer.

Cech left out of Premiership team of the year

Petr Cech has missed out on this year's English Premier League's ideal first 11 team, to the surprise of fans. Cech lost his place in this season's Professional Footballers Association's Premiership Team of the Year to Newcastle and Republic of Ireland goalie Shay Given.

Skacel in the running for Scottish football award

However, for Rudolf Skacel a major award could still be on its way. Skacel is one of the four players shortlisted for the Scottish Professional Footballers Association's Player of the Year award. The Czech midfielder, currently on loan to Hearts from Olympique Marseille, is up against Kris Boyd of Rangers and Celtic duo Shaun Maloney and Stillian Petrov. The winner will be announced on April 30th. 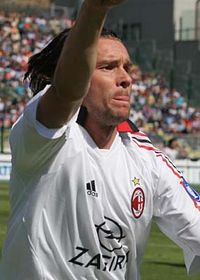 Marek Jankulovski, photo: CTK Meanwhile, in the Italian Serie A, Czech defender Marek Jankulovski has scored his first goal for AC Milan, helping his team to a 3-1 win over Messina. Thanks to the win, Milan are now only three points behind leaders Juventus, who drew 1-1 with Lazio.

Czech driver Tomas Enge is expected to make an appearance in tomorrow's Indy Japan 300. Enge was in Australia testing a V8 Supercar last week when he received word that he would have to substitute for Eddie Cheever Jr. for Cheever Racing. He immediately returned to the Czech Republic to secure a visa to race, then travelled to Indianapolis to complete the paperwork for the Indy Racing League before making the long flight to Japan. 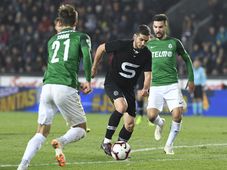