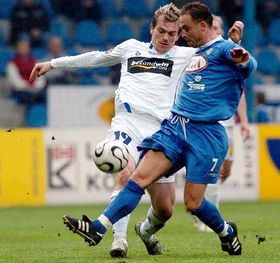 Liberec - Most, photo: CTK A 1-1 tie with Most at the weekend was enough for celebrations to begin in Liberec, who won this year's league title at home. The first-place finish is the 2nd in four years. In the game Liberec went ahead in the 20th minute on a goal from Jan Blazek but Most eventually came back on a Horst Siegl penalty, making it even-steven two minutes from time. If the tying goal took some lustre off an otherwise winning occasion, nobody noticed, with jubilation clear to see all round the Liberec stadium. The team's coach Vitezslav Lavicka:

"The most important thing is that we were able to clinch the title at home - in front of our fans who supported us all season and created an excellent atmosphere. In recent matches the pressure was enormous so we're proud. The main thing is that we won at home."

In international football, meanwhile, Czech fans can celebrate a repeat by London's Chelsea, once again taking the English Premiership title. Goalkeeper Petr Cech was once again instrumental in helping his side finish on top. But this year's title, he says, was more difficult than the first.

"They say it's more difficult to defend the title than to win it the first time and I think that this season was proof. We were the target for all the teams and all had motivation to try and beat us. That's why winning this time was harder and I'm glad we were able to pull through."

With a little over a month to go before the football World Cup in neighbouring Germany, fans are hoping to see the return of striker Jan Koller - the most successful scorer in the national side's history. Koller has been sidelined since last September with a knee injury, but has been training furiously to make the date. The Czech team faces the US on June 12th.

Last week team coach Karel Brueckner said that he was optimistic Koller would return. Three other players are also doubtful: Vladimir Smicer, Vratislav Lokvenc, and Zdenek Grygera. The full line-up for the championship is to be officially submitted by May 15th. Pavel Nedved (left), photo: CTK On a lighter note, the well-known computer game manufacturer EA Sports has already released its game version of the 2006 World Cup. Of interest for Czech fans is the fact that some Czech players get special attributes. In the game, Czech striker Milan Baros reportedly benefits from his speed, while midfielder Tomas Rosicky is touted as an excellent play-maker. The Czech's greatest star, Pavel Nedved, meanwhile, is credited with being an excellent shooter at distance. In short, the designers of the game have captured a slice of real life. Ales Hemsky, photo: CTK On Monday night, in the Stanley Cup playoffs, the Edmonton Oilers rallied with 4 goals in the third period to crush the Detroit Red Wings. Once again, the Wings were eliminated in an early round, after enjoying a phenomenal regular season (Detroit finished 1st of all the league's teams, with 124 points). On Monday things began to go wrong for Detroit with under four minutes left in the 3rd, when the puck went off Czech forward Ales Hemsky to tie the game at three goals apiece. Video was consulted before the goal was allowed. Then, it was Hemsky again: this time with little more than a minute remaining he scored the game's final goal and sent the Wings home disappointed.

Following his team's being swept from the Stanley Cup playoffs, Jaromir Jagr will have to decide whether or not to go ahead with surgery. The star player suffered a dislocated shoulder in the New York Rangers' match-up against New Jersey. New York lost all four games. Jagr - who set a number of key records with the Rangers in the regular season and was phenomenal leading up to the play-offs - would reportedly like to get the operation over as soon as possible in order to prepare for next year. 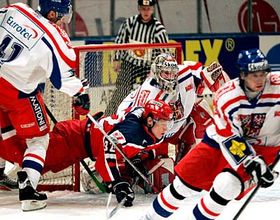 Photo: CTK This Friday will see opening games in the preliminary round at the Ice Hockey World Championships in Latvia. Defending champions the Czech Republic - who won in Vienna last year - could have their work cut out for them. The daily "Sport" has pointed out that thirteen players on the squad are rookies who have never before played in the championship - a situation its reporter sees as far from ideal. On the other hand, the team should be able to rely on old-hands like forward David Vyborny, defenseman Tomas Kaberle, and goalie Milan Hnilicka.

Meanwhile, Czechs may get additional help following the outcome of the Carolina-Montreal series in the NHL playoffs. Depending on who wins the series, the Czechs could see additional players added to the roster - either Radek Bonk or Jan Bulis from Montreal, or Frantisek Kaberle or Josef Vasicek from Carolina.

The Czech national team plays its opener on Friday against hosts Latvia.