Questions asked about quality of medical care for Czech players at World Cup... 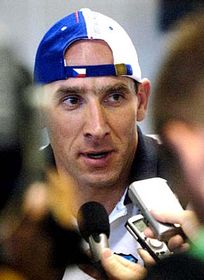 Jan Koller, photo: CTK The Czech football team's early exit from the World Cup in Germany continues to dominate the sports pages here in the Czech Republic. One of the main issues is whether the Czech players received adequate medical attention, particularly in the case of Milan Baros, who was sidelined for the first two group games with a mysterious foot injury. There have been suggestions that Czech team doctors were slow to realise the seriousness of Baros's injury.

Meanwhile, an injection given to Jan Koller by his former club doctor at Borussia Dortmund could have slowed down his recovery, one specialist told Mlada fronta Dnes newspaper.

However, Czech manager Karel Bruckner says national team doctors do not bear any responsibility for the Czech team's failure to advance from the group stage at the World Cup.

...while Bruckner is offered new contract despite perceived shortcomings Karel Bruckner, photo: CTK The spotlight has also been turned on the performance of Bruckner himself. He has been accused of relying on out-of-form players, abandoning the attacking tactics that led to success at Euro 2004 and unwillingness to communicate with the media.

But the Czech football association evidently don't agree with these assessments. In fact even before the Czech team returned from Germany they offered the manager a new two-year contract - that would make him 68 years old at the time of Euro 2008. Bruckner has provisionally accepted the offer, but says he will give a definitive answer in the next couple of weeks.

Vaidisova tipped to do well at Wimbledon, Berdych has back problem

Several Czech tennis players will be in action this week - and I hope next week - at the All England Tennis Club in south London. Perhaps the greatest Czech hope at this year's Wimbledon will be 17-year-old Nicole Vaidisova. She is seeded 10th, though British bookies are more confident she will do well - she is their fifth favourite to win, with odds of 9:1.

But things aren't looking so good for Tomas Berdych. He is seeded 13th (one place above compatriot Radek Stepanek) but has been suffering from a back injury since recently losing a final in Halle, Germany to Roger Federer.