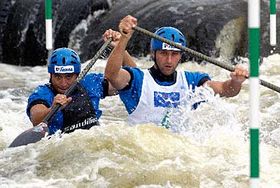 Jaroslav Volf and Ondrej Stepanek, photo: CTK Prague's district of Troja was the setting for this year's Slalom Racing World Championships, which began on Thursday and reached a climax on Sunday. The Czech Republic's biggest success was gold for Jaroslav Volf and Ondrej Stepanek in the C2 canoeing doubles category. Stepanek said it had been fantastic to win at home, in front of friends and family. There's wasn't the only Czech success: Stanislav Jezek took bronze in the C1 category. 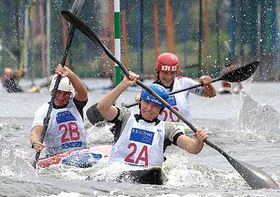 Yvetta Hlavacova, photo: CTK Staying in the water, the Czech swimmer Yvetta Hlavacova set a new women's world record for swimming the English Channel at the weekend. Hlavacova reached the French coast in a time of 7 hours 25 minutes and 15 seconds, having swum 36 km. She then attempted to swim back to England in an effort to set a record for both ways across La Manche, but was forced to quit due to exhaustion. In all she spent 14 hours in the water and swam 60 km.

David Cech, meanwhile, became the first Czech to complete the gruelling swim in both directions. He swam from France to England on Sunday, two years to the day after making it the other way.

After reaching the semi-finals of a tournament in San Diego, Czech tennis star Nicole Vaidisova is now ranked ninth in the world. The 17-year-old becomes the first Czech player in the women's top ten since Jana Novotna in 1999. By coincidence, the leading Czech men's player, Radek Stepanek, is also ninth in the world. 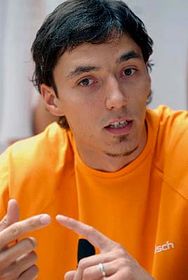 Jiri Welsch, photo: CTK We've been referring to Jiri Welsch for some time as "the only Czech in the NBA". Well, not any more. Welsch's hopes of finding a new club there came to nothing, and he has just completed a transfer from the Milwaukee Bucks to Malaga in the Spanish basketball league. The 26-year-old was only the second Czech ever to play in the NBA, playing for five different clubs in four years. 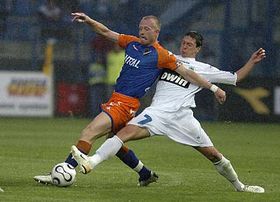 Slovan Liberec - Banik Ostrava, photo: CTK The two Czech teams taking part in the final qualifying round of football's Champions League this week were successful in the Czech domestic league at the weekend. Slovan Liberec beat Banik Ostrava 2:0, while Mlada Boleslav beat Slovacko by the same score-line. Mlada Boleslav even hired a special plane to take them to south Moravia for the game; the idea was to spend as little time as possible travelling ahead of their clash with Galatasaray in Istanbul on Wednesday.