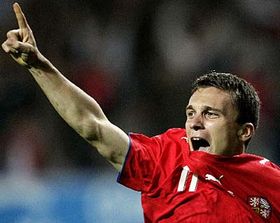 David Lafata, photo: CTK The Czech football team have got off to a positive start in their bid to reach the 2008 European Championships, with a thrilling 2:1 win over Wales in Teplice on Saturday. Coach Karel Bruckner made some inspired selections. Mlada Boleslav striker Marek Kulic, making his international debut weeks short of his 31st birthday, was voted man of the match, though it was substitute David Lafata of Jablonec who stole the headlines: two minutes into his international debut he scored with his first touch to put the Czechs ahead. And if that didn't sound enough like a fairytale, he scored again on 89 minutes to win the game, after a Martin Jiranek own goal had brought Wales back into it. 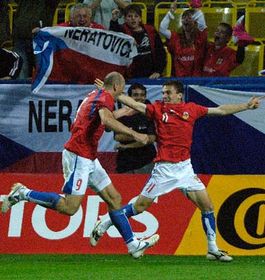 Jan Koller and David Lafata, photo: CTK While the Czechs were celebrating in Teplice, the Welsh manager John Toshack - a great player in his day and former boss at Real Madrid - was angry after the match, saying match officials had made some serious mistakes.

"Apparently the first goal - they tell me - was in a clear offside position. I didn't see that too much. The second goal annoyed me - you can't take a free kick...throw the ball on the floor and take it while it's rolling, it's not in the rules - it has to be still. We're clutching at straws a little bit, maybe, saying that, but that is what happened. You wouldn't say that's why we lost...things happened after that. But we took a chance when we were 1:0 behind, we got ourselves back into it...to lose it after that is cruel, because they're bad goals from our point of view, I think they could have been prevented. Although if the first one's offside, it's offside."

The Czech Republic should face a sterner test in their next game, against Slovakia in Bratislava on Wednesday night. 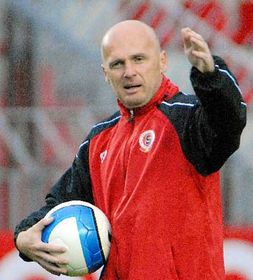 Michal Bilek, photo: CTK Staying with football, the country's richest club Sparta Prague have appointed their 16th manager since 1993, with Michal Bilek replacing Stanislav Griga at the end of last week. Like Bilek himself, Sparta's new assistant boss Horst Seigl is another former star player for the club. Only last week Siegl scored his 176th league goal, for Most. The former international said along with accepting the new job he has decided to hang up his boots, at the age of 37.

Novak, Berdych still in US Open as week two of tournament begins 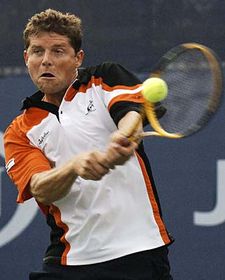 Jiri Novak, photo: CTK There are two Czech singles players, both men, left in tennis's US Open as the tournament goes into its second week. Jiri Novak reached the fourth round after a four sets win over Belgium's Xavier Malisse. But the 31-year-old will have a lot to do to overcome his next opponent, second seed Rafael Nadal of Spain. Tomas Berdych, meanwhile, overcame Russia's Dmitri Turusnov in five sets to set up a fourth round clash with James Blake of the USA.

Gold for Spotakova in Berlin

Barbora Spotakova, who recently set a new Czech women's record in the javelin, topped the podium at the final athletics Golden League meeting of the season in Berlin at the weekend.