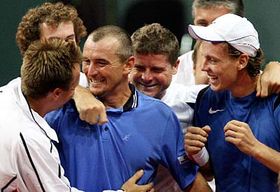 Tomas Berdych, right and Martin Damm, second left, react after winning their double tennis match against Rogier Wassen and Peter Wessels of The Netherlands, photo: CTK After a year's absence the Czech men's tennis team have returned to the highest tier of the sport's biggest international competition, the Davis Cup. The Czech Republic will go into Thursday's draw for the competition's elite World Group after a comprehensive win over the Netherlands in Holland. The Czechs got off to a flying start on Friday, with both Jiri Novak and Tomas Berdych winning in the singles. Berdych and Martin Damm then sealed the tie with a win in the doubles as the Czech team marched to a 4:1 win (Jan Hernych's singles defeat taking just a little gloss off a very successful weekend). Here's the Czech coach Jaroslav Navratil. 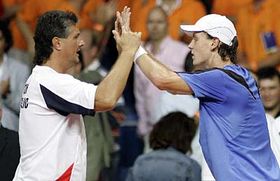 Jaroslav Navratil and Tomas Berdych, photo: CTK "I think to a man the players gave their all. Now we have to hope we don't get a difficult opponent in the draw - we'd like to avoid another playoff. The team has potential...I think the most important issue is whether Radek Stepanek gets fit and returns to the team - I think with Berdych and Damm in the doubles it'd be a very strong team."

Czech number one Radek Stepanek hasn't played for the country's Davis Cup team for some time, after a dispute with Navratil's predecessor as coach, Cyril Suk. Stepanek said last month he would draw a line under past disagreements and make himself available for selection again.

Mlada Boleslav pull away at top of Czech football league 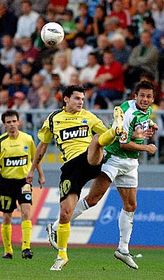 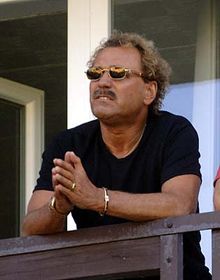 Ivan Hornik, photo: CTK Off the pitch, two of the "bad boys" of Czech football have been in the headlines: Sparta handed down an undisclosed fine to hard man defender Tomas Repka for giving the middle finger to Teplice fans last week; and Ivan Hornik, the former Viktoria Zizkov boss disgraced in a corruption scandal, is back in the game, as advisor to Pribram president Jaroslav Starka.

The great Czech ice hockey goaltender Dominik Hasek made a successful return to the Detroit Red Wings, winning his first game with the club after a gap of almost three years on Saturday. As they beat Tampa 5:4, Hasek, who is 41, received rapturous applause from Detroit's fans.