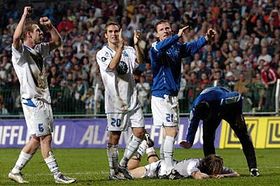 Photo: CTK There may not be any Czech football clubs in the Champions League this season, but a record three Czech teams have qualified for the group stage of Europe's second tier competition, the UEFA Cup. Sparta Prague overcame Scotland's Hearts while Liberec saw off Red Star Belgrade, but it was Mlada Boleslav who made the most headlines. They had lost 1:0 away to Olympic Marseille in the first leg and had a huge hill to climb on Thursday. And when they twice fell behind things looked grim indeed. But Mlada Boleslav - in the Czech second division just two seasons ago - battled on, scoring in the dying seconds to win 4:2 and secure the most famous victory in the club's history.

Dusan Uhrin Jr., photo: CTK "Of course it was a hard game for us. We had to make up the deficit from Marseille and we were losing here...But we turned the game around thanks to our aggression and fighting spirit. I can't say I believed we would go through, but I did believe we could win. Once it was 3:2 then I started to think we could qualify." Mlada Boleslav - Teplice, photo: CTK As I said, Sparta and Liberec have also reached the group stage of the UEFA Cup, and Uhrin (whose father guided the Czech team to the final of Euro '96) said Thursday night's games were the best advertisement for the Czech league, where attendances at games are pitifully low.

"I'd like to call on spectators to start going to watch Czech teams. We've just beaten Olympic Marseille, who a couple of rounds ago were leading the French league. We're doing everything we can to make sure Czech football things improve in Czech football."

That dramatic win over Marseille may have sapped some of Mlada Boleslav's powers: on Sunday they suffered their first league loss of the season, going down 2:0 away to Teplice.

Jagr back on the ice - and among the goals

On the eve of the new NHL season, Czech hockey star Jaromir Jagr has made a return to the ice after undergoing a shoulder operation in June. Jagr successfully completed two friendlies in two days with the New York Rangers, scoring and providing an assist in the second. The Kladno-born forward said his main aim had been to survive the games and that he had expected a more difficult comeback. Liberec - Zlin, photo: CTK In the Czech Extraliga Znojmo are leading after ten rounds, ahead of Sparta and Zlin. But the biggest surprise of the season so far has been Slavia Prague's form. Slavia - who reached last season's finals - are currently bottom of the league with only nine points from a possible 21.