Roman Sebrle has been named Czech Athlete of the Year for the fifth time in a row, after a successful season in which he took gold in the decathlon at the European Championships in Gothenburg. The poll of journalists, officials and trainers was a close-run thing however, with Sebrle just pipping Barbora Spotakova in the closest vote in a decade. Spotakova shot to fame this year with gold in the javelin at the World Athletics Final, silver at the European Championships and a new Czech record.

Roman Sebrle said he believes Spotakova will come first in the javelin at the next Olympic Games - and isn't afraid that she may eventually replace him as Athlete of the Year.

"I will be happy if there is a tougher fight for top place. I can't judge how I will perform in a year's time, I can't say how Bara will be doing. But if next year there are ten athletes who are serious candidates for the Athlete of the Year award that will only be a good thing for Czech athletics, and the Czech Republic." 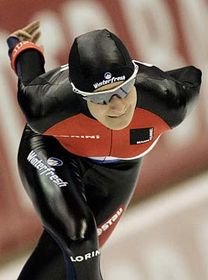 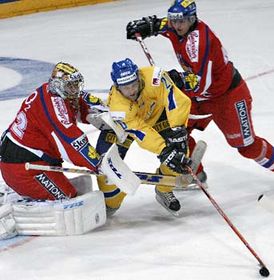 Czech Republic - Sweden, photo: CTK The Czech ice hockey team finished second in Finland's Karjala Cup, which is part of the Euro Hockey Tour. The Czechs beat Sweden before losing to Finland and being beaten by tournament winners Russia on penalties. The Czech Republic are currently bottom of the table in the four-country Tour.

Sparta top league for first time in year and half

The country's richest and most successful football club Sparta Prague are currently top of the Czech league for the first time in 18 months. They went first after beating Olomouc 1:0 and watching former leaders Liberec go down 3:0 to Teplice. Sparta have made quite a turnaround since Michal Bilek took over as manager in early September - from that time they haven't lost a game and have conceded only one goal.

The Czech national team will have to do without captain Tomas Rosicky on Wednesday, when they take on Denmark in a friendly in Prague. Rosicky picked up a thigh injury in training at club Arsenal. Jiri Jarosik has also cried off, with an ankle injury. But the fact that he appeared for club Glasgow Celtic on Saturday seems to confirm speculation about a rift between Jarosik and Czech manager Karel Bruckner.

Oldrich Nejedly Seventy-two years after the game, world football's governing body FIFA has acknowledged that Czechoslovakia's Oldrich Nejedly scored a hat-trick in the 1934 World Cup. One of Nejedly's three goals in the 3:1 semi-final win over Germany had been wrongly attributed to another player, a move evidently aimed at stopping him winning the golden boot for top scorer at the tournament.