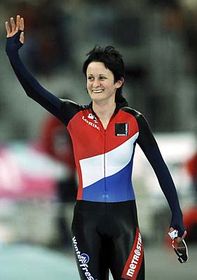 Martina Sablikova, photo: CTK Martina Sablikova has become the first Czech speed skater in history to win a World Cup event. The twenty-year-old, who was also crowned European champion last month, won the women's 3000 m event in Turin on Saturday, finishing half a second ahead of Dutch Olympic champion Ireen Wust. Victory was all the sweeter for Sablikova because her win came in the same venue where she disappointingly failed to get among the medals at last year's Winter Olympics.

"Definitely, everything here reminds me of the Olympics. That's for sure. Even at the start of the race when the gun went off, I said to myself that I have to get off to a good start and not start slowly like I did at the Olympics. In the end it worked out. It was a good tactic from my coach. It really was perfect." 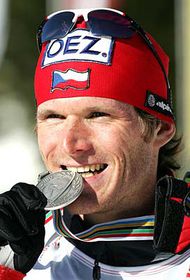 Michal Slesingr, photo: CTK Staying with winter sports and Czech skier Michal Slesingr celebrated his 24th birthday in style on Saturday by becoming a surprise silver medallist in the men's 10-km sprint at the biathlon world championships in Anterselva, Italy. Slesingr finished 4.8 seconds behind Norwegian winner Ole Einar Bjoerndalen to take his place on the podium. It's the first time the former world junior champion has got among the medals at a senior world championship event.

Speculation is mounting that former world 800-metres champion Ludmila Formanova may be about to retire after she pulled up during an indoor race in Prague at the weekend. She had previously pulled out of earlier indoor meetings this season in Vienna and Stuttgart. The 33-year-old runner has had problems with a long-term back injury and says she would prefer to quit rather than continue running through the pain.

Ice hockey now and Liberec seem unstoppable in this year's Extraliga following a 2-1 away win over fellow play-off hopefuls Pardubice. The victory now leaves Liberec 11 points clear at the top of the table ahead of Ceske Budejovice.

Finally, the commercial Prima TV channel has pipped state broadcaster Czech Television for the right to screen matches from next year's European football championships in Switzerland and Austria. It's the first time a commercial television station has won broadcasting rights in the Czech Republic for an event of this magnitude.