Silver for Neumannova in ladies' 15 km pursuit in Sapporo... 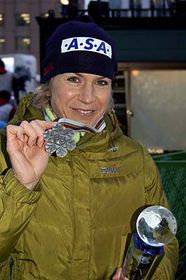 Katerina Neumannova, photo: CTK The great Czech cross country skier Katerina Neumannova won the tenth major medal of her career on Sunday, when she took silver in the ladies' 15 km pursuit at the Nordic World Ski Championships in Japan's Sapporo. Neumannova finished just half a second behind Olga Savialova of Russia in what is not her favourite competition, and was clearly satisfied with second place.

"It was a really good result for me. It has relaxed me ahead of the rest of the World Championships. Sometimes you miss out on gold and you're left with silver, which happened to me in the ladies' pursuit at the Olympics last year. But today I feel I have won silver, because I didn't feel I had the strength to win. I gave my all at the end of the race." 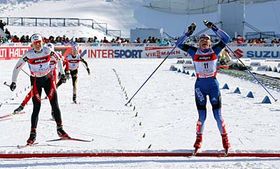 Olga Savialova, (right), of Russia and Katerina Neumannova, (left), reacts after finishing the women's Pursuit 7.5km classical and 7.5km free event in Sapporo, photo: CTK Katerina Neumannova said that after coming second her young daughter Lucka had asked: why didn't you win? Perhaps the child's wish will come true on Tuesday, when Neumannova goes for gold in the 10 km free. But, she says, the weather could pose a problem... 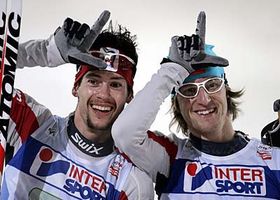 Bronze medalists Milan Sperl, (right), and Dusan Kozisek, (left) photo: CTK "For me the biggest worry isn't the form of my rivals, but the weather. The forecast is for relatively warm weather - up to 5 degrees Celsius above zero and 25 cm of new snow. The conditions could really influence the outcome."

Neumannova hasn't been the only Czech among the medals in Sapporo: Dusan Kozisek and Milan Sperl took bronze in the men's team sprint. Petr Cech, photo: CTK Czech football goalkeeper Petr Cech took his first medal of the year on Sunday, when his Chelsea won England's League Cup. The club are still in the running for three other titles this season. 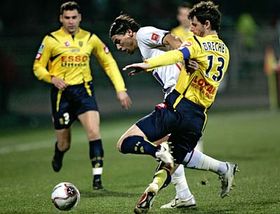 Lyon's Milan Baros, center, challenges for the ball with Jeremie Brechet of Sochaux during their French League One soccer match, photo: CTK Cech's international team-mate Milan Baros played his first full game for Lyon, scoring his second goal for the French league leaders since joining the club in January.