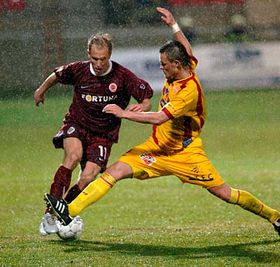 Photo: CTK Starting with football and Sparta Prague bounced back from their shock home defeat to Jablonec last week to record a comfortable two-nil win away to Pribram on Sunday. Marek Kulic and Jan Simak scored the goals that moved Sparta back to the top of the Gambrinus League, two points ahead of arch-rivals Slavia Prague. Sparta's stay at the top could be short-lived, however, as Slavia could overtake them again should they defeat Brno at home on Monday evening. 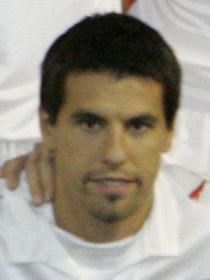 Milan Baros Staying with soccer and Czech international striker Milan Baros's good run of form continues. Baros scored the opening goal in Olympique Lyon's three-nil trouncing of Nancy, which saw his side go a massive sixteen-points clear in the French first division. It was the Czech striker's fourth goal for Lyon since joining the club in January after an unhappy spell at Aston Villa. Many Czech fans will now be hoping that Milan Baros can bring his good form into the Czech team for their crucial Euro 2008 qualifier against Germany on Saturday.

Czech ice hockey's Extraliga nears its climax this week when the semi-finals start on Monday. Liberec who finished well ahead of everyone else in the league phase are first up against a rapidly improving Sparta Prague. The other semi-final between Pardubice and Ceske Budejovice begins on Wednesday. Both semi-finals are the best of seven matches.