Drama in Extraliga playoffs as Pardubice come back from dead 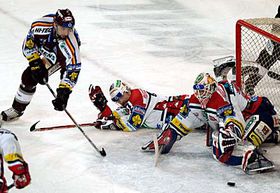 Sparta Prague - Pardubice, photo: CTK The Czech ice hockey Extraliga playoffs took a dramatic turn on Monday night. Sparta Prague went into the fourth game of the best-of seven series 3:0 up over Pardubice - in other words, just one game short of victory. After taking a 3:7 hammering in the previous game, few could have foreseen a comeback from Pardubice, while Sparta would have been looking forward to winning the title at their home arena. But Pardubice (as one paper put it) rose from the dead like Jesus at Easter, beating Sparta 5:2 to keep the playoffs alive. Here's Pardubice's Slovak goaltender Jan Lasak, who had a torrid time in the first three games of the playoffs.

Game five of the playoff series takes place in Pardubice on Thursday evening. 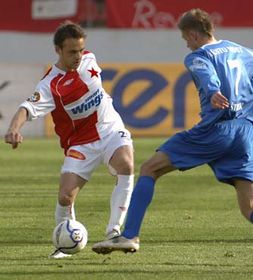 Slavia Prague - Most, photo: CTK Things are just as dramatic in the Czech football league, where Slavia Prague have now opened up a four-point lead at the top of the table. They beat Most 3:0 at home on Sunday, making it four wins outs of four, since the league resumed after the winter break. But there are nine games remaining this term, and Slavia coach Karel Jarolim has been warning his players to keep their feet on the ground.

...while Sparta send two to reserves after further defeat 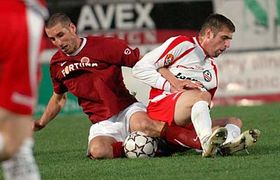 Sparta Prague - Zlin, photo: CTK Slavia's bitter rivals Sparta remain in second place, after losing 2:0 away to Zlin. They went into the spring part of the season in front but have lost two of their four games since then. On Monday Sparta took a rather radical step, kicking defender Jaroslav Drobny and midfielder Jan Simak out of their A squad. Coach Michal Bilek explains why.

"They were lax in carrying out their responsibilities and did not behave seriously. It's a temporary move, not a definitive expulsion. It depends on them how long they remain in the B team. If they work hard and realise what it means to play for Sparta, there is a chance they can return."

Berger hoping to get extension to contract at Aston Villa

Former Czech international Patrik Berger is working hard to extend his stay at English Premiership side Aston Villa. The 33-year-old midfielder, who has missed much of recent seasons through injury, scored and set up another goal for Villa on Saturday, then crossed for another on Monday. Berger is out of contract in the summer and there has been talk of a possible move to the MSL in the United States. But he wants to stay at Aston Villa because his family have settled in the area, and manager Martin O'Neill has indicated there will be room for Berger in the team he is building for next season.

The Czech racing driver Tomas Enge is expected to make a full recovery after surgery to repair his fractured left elbow. Enge, the only Czech to ever take part in Formula 1, was recently involved in a bad crash during a race in the US.