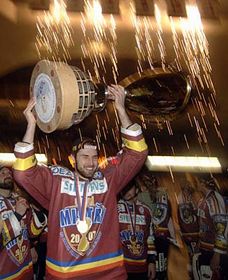 Photo: CTK For some the series might have looked iffy after Pardubice stormed back to win two in a row but Sparta Prague put any doubts to rest on Saturday when they closed out the sixth game of this year's Extraliga playoff final. The Prague team clinched a pretty 2:0 win that saw them crowned playoff champions once again. Sparta becomes the first team in the Czech hockey league to win back-to-back titles since the 1990s. On Saturday it was once again a driven group of players that stepped onto the ice, with the first opportunities coming early. In the opening minutes Sparta peppered Pardubice goalie Jan Lasak during a 5-on-3 power-play. Ondrej Kratena took full opportunity and got the first of two unanswered goals on the night. After clinching the best-of-seven series 4:2, Sparta marked the rest of Saturday by boisterous celebrations by both fans and the players.

Across the pond in the NHL, Jaromir Jagr's New York Rangers went up 2:0 in their opening Stanley Cup playoff series against Atlanta by winning their last meeting 2:1. Both wins were on the road and the Rangers now return home for Games 3 and 4. In Game 1 against the Thrashers Jagr scored the Ranger's first goal, while in Game 2 fellow Czech Martin Straka assisted on the series' most curious goal, a ricochet that caught netminder Hedberg out of position. The Ranger's Sean Avery, getting the puck, dumped it off the boards but it headed most unexpectedly straight into Atlanta's net. Game 3 is set for Tuesday. 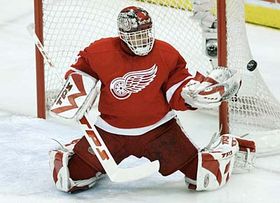 Dominik Hasek, photo: CTK In other NHL action, the Detroit Red Wings are also enjoying a 2:0 jump in their series against the Calgary Flames. Czech goalie Dominik Hasek has only let in two shots in six periods, while the Detroit gunners have been busy up front. To be fair Detroit's defense has been more than helpful and Hasek has faced relatively few shots: just 20 in Game 1 and a lowly 15 in Game 2. The 42-year-old Hasek is focused to try and win his second Stanley Cup with Detroit after winning it with them for the first time in 2002.

Chelsea in final of FA Cup 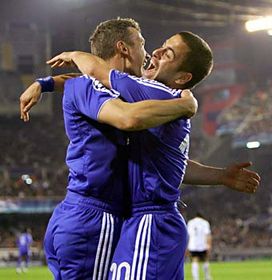 Photo: CTK In football, English side Chelsea have made it to the FA Cup final after beating Blackburn 2:1 in extra time. Goalkeeper Petr Cech played a goal kick which started off a play that saw Lampard score for Chelsea in the 17th minute. In the game Cech made important saves on a number of occasions but also made a few mistakes, including one that led to the equaliser. Ballack later secured the win for Chelsea in the 19th minute of extra time.

Following the game, team coach Jose Mourinho singled out Petr Cech for praise, saying his being "the best in the world" was all the more extraordinary for his quick recovery from injury last year. Cech's Chelsea will face Manchester United in the FA Cup final. 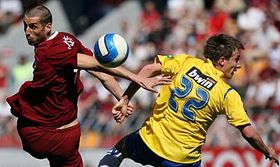 Sparta Prague - Teplice, photo: CTK In domestic football action, Sparta Prague downed Teplice 2:1 at the weekend to inch closer to league leaders Slavia, just two points ahead. Slavia themselves lost a point by tying with FC Slovacko. Liberec, in third place, tied with Most to remain seven points off of the leaders.