Starting with football and Milan Baros who has just won his first international title with Olympique Lyon has continued to deny that there was anything racist in a gesture he made to an opposing black player. Baros was caught on camera last week holding his nose in front of Cameroonian player Stephane Mbia, a gesture many interpreted as racist. The story has been widely covered in the French media with only the country's presidential elections taking up more airtime and column inches.

"First of all I'm not racist. I've never said anything racist to anyone in my whole life. I can understand how people want to make a big story out of this, but they are making this big story from nothing. If you were to call Mbia and ask him if I said something racist against him, he would say "No" if he was being honest."

Baros says that he was telling Mbia to stop crowding him on the pitch and to give him some air. He claims he made the gesture because he didn't know how to say this in French. Baros also told the Czech Press Agency at the weekend that he phoned Mbia and straightened everything out with the Cameroonian. It may not be enough for him to escape punishment, however. The French FA is investigating the Czech striker for racist behaviour. If found guilty, he could face a six-match ban and his side Olympique Lyon could even be docked points.

Liberec put pressure on Sparta and Slavia ahead of Prague derby

Staying with football and Liberec put pressure on Slavia Prague and Sparta Prague at the top of the Gambrinus League. The north Bohemian side beat Kladno one-nil away to move into second place behind leaders Slavia on goal difference and two points ahead of third-placed Sparta having played a game more. Sparta and Slavia play their game in hand against each other on Monday, in what is one of the most eagerly awaited Prague derbies in years. A sell-out crowd of more than 20,000 people is expected to watch the match at Sparta's Letna stadium, the biggest turnout for a derby since the Czech league was established in 1993. 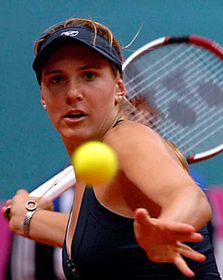 Nicole Vaidisova, photo: CTK Moving on to tennis now and the Czech ladies' team enjoyed a resounding victory over Slovakia in the Fed Cup at the weekend. The Czechs took all the rubbers of their match to get an easy five-zero win over their near neighbours in Bratislava. The Czech ladies now face a play-off with Belgium for a place in the elite World Group. 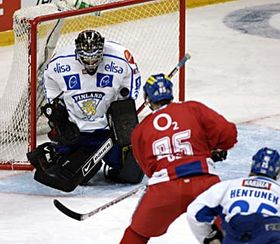 Czech Republic - Finland, photo: CTK Finally some ice hockey news, and the Czech Republic took third place in the Euro Hockey Tour after beating Finland 2:0 after extra time on Saturday in Prague's Sazka Arena. The tournament is an annual ice hockey event for teams from the Czech Republic, Finland, Russia and Sweden, who were using the contest to give less experienced players some valuable ice time in their national colours ahead of the World Championships, which start in Moscow later this week.