In Sports News this week: Roman Sebrle falls short of a record six straight wins in the decathlon at Austria's Gotzis, while Tomas Dvorak - briefly - reminds spectators of his glory days; its D-Day the Czech football league, with Sparta Prague closing in on the double; Karel Poborsky plays his last game; and has ice hockey legend Dominik Hasek played his? 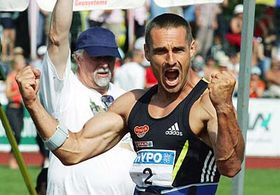 Roman Sebrle, photo: CTK Austria's Gotzis has been a happy hunting ground for the great Czech decathlete Roman Sebrle; five years in a row the Olympic Champion won at the meeting, where he also set his decathlon points record. This year, though, things didn't work out for the Czech, when he missed out on a record six straight titles after finishing almost 100 points behind surprise winner Andrei Krauchanka of Russia. But Roman Sebrle said he was satisfied with second as he had not completely recovered from a recent bout of illness.

Meanwhile, Tomas Dvorak reminded spectators in Gotzis of the days when he was three times world champion; he got off to a great start in the decathlon and was heading for the veterans' (over 35s) world record. However, the competition ended in frustration for the 35-year-old when he sustained an injury in the first event on day two, the 110 m hurdles.

Football league heading for most dramatic conclusion in years 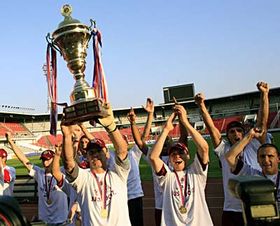 Photo: CTK The Czech football league will reach a conclusion on Monday evening, after the recording of this programme. Sparta Prague are one point in front going into their last game, against Most, and will win the league as long as they at least manage to do as well as second-placed Slovan Liberec. Sparta are on course for the double, after taking the Czech FA Cup last week with a 2:1 win over Jablonec.

Jarosik has Scottish double, but has he got a reason to celebrate?

Jiri Jarosik has already won the double in Scotland with Glasgow Celtic. Though it's hard to know how much the blonde midfielder will be celebrating - he didn't exactly set the world on fire at Celtic.

One of the greats of modern Czech football Karel Poborsky is set to make his final appearance on Monday evening, when he lines up for Ceske Budejovice against Slavia Prague. Poborsky, who is 35, played 118 games for the Czech Republic, which is a record.

...while Hasek ponders whether he should do likewise

Another Czech sports veteran ice hockey goaltender Dominik Hasek is considering his future, after Detroit Red Wings were knocked out in the semi-finals of the Stanley Cup. Hasek, who is an incredible 42, says it is too soon to say whether he will continue in the NHL next season.