Czech Republic - Italy, photo: CTK After losing to Serbia on a last minute goal earlier in the week at football's Under-21 European Championship in the Netherlands, things went from bad to worse for the Czech national squad on Sunday. The side was outshined and outplayed be Italy who won the game 3:1. The Italians opened the scoring early with the Czechs getting one back - their one goal of the tournament - but by half time Italy were up by two, and that's the way it stayed until the final whistle. Not surprisingly Monday's newspapers describe the Czechs' early - if fully-deserved - exit from the tournament as disappointing: their poor performance is doubly painful because it means they will now not have a chance to qualify for next year's Olympics.

Will Nedved return to the pitch? 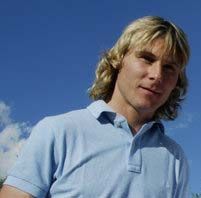 Pavel Nedved, photo: CTK Star midfielder Pavel Nedved, who plays for Italian football club Juventus, has not yet said whether he is planning to retire from professional football or continue next season. He has said he will make an announcement by the end of the month (June 30th). The player - who won the Best European Player award in 2003 - was a major asset this year in helping Juventus move out of Italy's Serie B to return to the top flight. The player has made clear that even if he does retire he and his family plan on staying in Italy, now home. Nedved has played in Italy for eleven years, ever since making a splash at Euro '96, which saw him transfer first to Lazio Rome and later to Juventus. Tomas Berdych, photo: CTK The leading Czech men's tennis player Tomas Berdych won his first tournament on grass at the weekend. The 21-year-old fourth seed beat last year's Wimbledon semi-finalist Marcos Baghdatis of Cyprus 7-5, 6-4 in the final at the Gerry Weber Open in Germany's Halle on Sunday. The win is Berdych's third ATP title; experts say it should put the player in the right frame of mind for the upcoming Wimbledon. 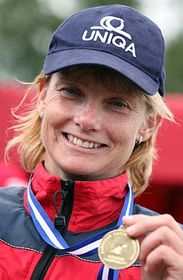 Stepanka Hilgertova, photo: CTK 39-year-old kayaker Stepanka Hilgertova has become the oldest European competitor to ever clinch a medal in the kayak slalom: at the weekend she managed to snag bronze in the event at the European Championships, held on the artificial slalom course at Liptovsky Mikulas in neighbouring Slovakia. Hilgertova was not the only Czech to finish with a medal: in the men's team canoe event Jaroslav Volf and Ondrej Stepanek won silver.

Star goalie Dominik Hasek has indicated he would like to come back for another season with the Detroit Red Wings. At 42, Hasek is one of the oldest goalies to ever play at top form in the NHL, but as last year's regular and postseasons proved, he remains in excellent shape. He helped the Red Wings this year advance far in the Stanley Cup. Hasek has one Cup to his name which he won with the Red Wings in 2002, but he has said he would like to try for another. Negotiations remain ahead but there is every indication the Red Wings will be happy to have Hasek back. The team's general manager Ken Holland stated last Friday that the team had been counting on Hasek, saying the team had only been waiting to see how the goalie would decide.