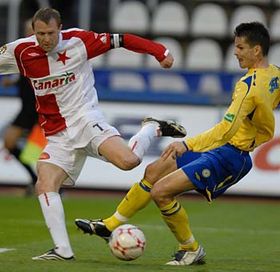 Slavia Prague - Teplice, photo: CTK Slavia Prague are now six points clear at the top of the Czech football league. They took on Teplice, who were then in second, in what was the biggest game of the 12th round, and extended their lead at the top with a 1:0 win courtesy of a Ladislav Volesak header. After Saturday's game, Slavia coach Karel Jarolim was asked what impact the result could have on the title race.

"It'd be sad of course if we didn't say we want to win the league. We want to and we'll do all we can to achieve that, and we'll see how things turn out. Today's game was important for us, definitely, but there are a lot of games left to play and things can change. We can't get too relaxed, but the game was important."

Another important fixture for Slavia is this week's Champions League group game against Arsenal at Strahov. The Czech side will be hoping to make amends for their last encounter with Arsenal, when they took a 7:0 hiding in London. Slavia will be without captain Stanislav Vlcek on Wednesday - he hobbled off with a shin injury during the Teplice game.

Sparta, featuring returnee Repka, go second after demolition of Most Most - Sparta, photo: CTK Sparta Prague are now second in the league, after a resounding 5:0 away win over Most. Sunday's match saw the return of Sparta's hard man defender Tomas Repka - the former Fiorentina and West Ham player had been banned for seven games after a violent reaction to being sent off. 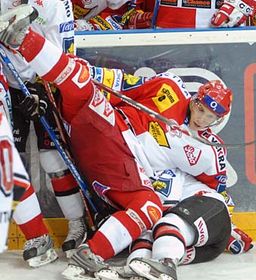 Slavia Prague - Znojmo, photo: CTK As in football the Czech ice hockey Extraliga is now headed by Slavia Prague. Slavia leapfrogged Liberec to first place after a 7:0 hammering of Znojmo in 19th round. In Sunday's other big game was Sparta Prague's 2:1 away win over Vitkovice, which was decided by penalties.

The Czech motorcyclist Lukas Pesek has finished fourth overall in this season's 125cc championship. The 21-year-old could have finished third overall, had he come first in the last Grand Prix of the season in Valencia. But the Czech - who came first in two Grand Prix races this season - could only manage fifth in Spain, and so finished just 11 points short of third in the season's standings. Looking back over what he describes as a "wild" year, Lukas Pesek said he had made so many mistakes that he was happy to finish fourth.