Barbora Spotakova, photo: CTK A great year for Barbora Spotakova was crowned on Saturday night when she was named Czech Athlete of the Year for the first time. Spotakova, who started out as a heptathlete, twice broke her own 2006 Czech national record in the javelin on her way to gold at the World Championships in Osaka; the 26-year-old from Jablonec nad Nisou became world champion with a throw of 67.07 m. Kitted out in her Czech Army uniform, the Dukla Prague athlete had this to say after the awards ceremony:

“It’s the peak of what has been a successful season for me. It’s great, and not something that happens every day. I’m aware of all the people around me who train so hard, it’s a lot of people, and I’m lucky enough to win the World Championships…I won’t be Athlete of the Year again, it’s a one off, and it means a lot to me, definitely.” 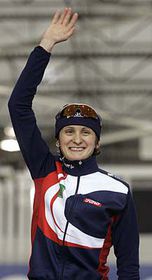 Martina Sablikova, photo: CTK Another Czech female world champion is Martina Sablikova, who at just 20 is the most successful speed-skater the country has ever produced. On Sunday Sablikova decided to compete in an event at Salt Lake City, despite suffering a painful arm injury just last week. And it was certainly worth her while entering: the Czech won her first race of this season’s World Cup in style, finishing around a minute and a half ahead of her nearest rival in the 3000 m.

Footballer Radek Sirl may be little known in his home country, but the Czech midfielder made a big impression on the Russian league at the weekend. He scored the only goal of the game as Zenit St Petersburg beat Saturn MO 1:0, with that win securing the Russia title for Zenit for the first time in 23 years. Sirl’s success came at the expense of fellow Czechs Radoslav Kovac and Martin Jiranek, whose Spartak Moscow finished second in the league. 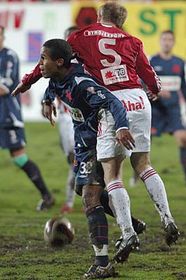 Viktoria Zizkov - Slavia Prague, photo: CTK Czech league leaders Slavia Prague were happy to draw with Arsenal in the Champions League last week, but will be kicking themselves now after only taking one point from Viktoria Zizkov on Sunday, when Zizkov scored an equaliser in time added on to end that game 1:1.