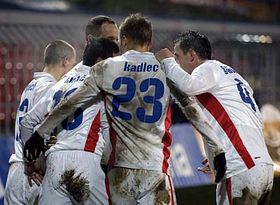 Photo: CTK November 17th, the anniversary of the Velvet Revolution which brought communism to an end in Czechoslovakia 18 years ago, seemed a fitting day for the Czech Republic and Slovakia to face off in a Euro championship qualifier at Prague’s Letna Stadium. Prior to the match, the Czech Republic had already qualified along with Germany, but tension was still high as both either can finish atop of Group D. 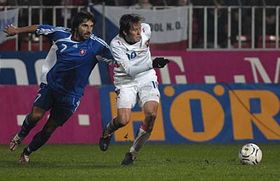 Photo: CTKThe Slovaks meanwhile were seeking consolation for their last match up against the Czechs which they lost 3:0. But their bid wasn’t successful: once again the Czechs ended up dominating the evening: goals came from Zdenek Grygera, Marek Kulic, and Tomas Rosicky and the Czechs won by a final score of 3:1. The win puts the national side atop the group with 26 pts, edging past Germany on head-to-head results. Afterwards, this is how striker Milan Baros summed up the match: 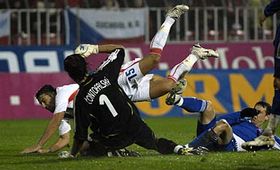 Photo: CTK “I think we deserved the win although the Slovaks didn’t get off to a bad start. They pressured us a bit with some clever passing but I think we deserved to take the game. In the end, we were able to put on a bit of a show, but their team isn’t bad, and they’re game wasn’t either. Both teams were a little more relaxed, even though we knew we are still playing for top spot.”

The Czechs face one more game in qualifying, against Cyprus on Wednesday.

In NHL ice hockey, the New York Rangers with Czech players including Milan Rozsival have been a roll, wining the last five of their games. The last, at the weekend, came against Pittsburgh, with defenseman Rozsival scoring twice to lift the Rangers over their rivals 4:3.

In other NHL matches, Radek Bonk and Martin Erat both scored as well as racked up assists for Nashville, beating Chicago 5:4 in overtime. Montreal defenseman Roman Hamrlik, meanwhile, notched up two assists in Montreal’s 7:4 win over Boston on Saturday. 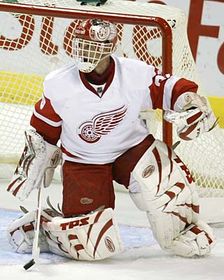 Dominik Hasek, photo: CTK By contrast, one player who can’t have been enjoying himself of late has been Detroit netminder Dominik Hasek, who allowed 4 goals on just 16 shots in a 5:3 loss to Chicago. The game before that he didn’t fare better, allowing four goals in a loss to St Louis that saw him chased from the net. On the plus side for Hasek: at least Detroit are still atop the Western Conference standings.

Lukas Konecny suffered an unfortunate setback and will be unable to compete in the World Boxing Organisation’s World Championship title fight in the JR (or light) middleweight category. The fight – against current champion Sergiy Dzinziruk of Ukraine - was scheduled for the end of November. But, Konecny suffered a rib injury in training and will be unable to return to the ring before next month. The boxer was to get 1 million crowns for appearing in the title match (the equivalent of around 55,000 US dollars). He told the Czech daily Sport that he hoped his and his opponent’s manager would be able to agree on postponing, rather than cancelling, the fight. 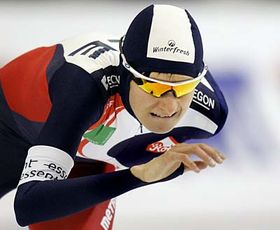 Martina Sablikova, photo: CTK Speed skater Martina Sablikova has seen two successful starts on the World Cup circuit: after winning the 3,000 metres at Salt Lake City, USA, the skater repeated the feat in Calgary, Canada. In doing so, she also set a new Czech record of 3:55:87, beating closest rival Groenewold of the Netherlands. Sablika, who is just 20 years old, just came off the injured list but complained she was still suffering pain to her arm. She had been injured in a recent fall in training.