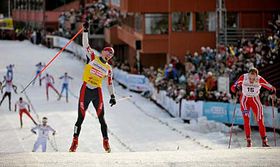 Lukáš Bauer, photo: CTK The Czech cross country skier Lukáš Bauer is drawing ever closer to the Crystal Globe for overall winner of this season’s World Cup: Bauer’s win in the 30-kilometre skiathlon at Sweden’s Falun on Saturday saw the man from west Bohemia increase his lead to a practically unassailable 408 points. A happy Lukáš Bauer explained his successful tactics after the race. 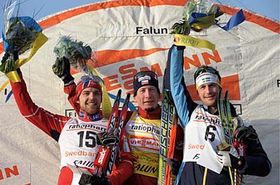 Lukáš Bauer (centre), second placed Norway's Tord Asle Gjerdalen (left), and third placed Sweden's Anders Sodergren (right), photo: CTK “My tactic was to not to go hell for leather, to remain in towards the front but not in the lead and save as much energy as I could for the skating section, which was very difficult. I concentrated on staying in a position from which I could attack and around 500 metres from the finish line I overtook Gjerdalen. It was a tough finish, but now I couldn’t be more satisfied.”

Lukáš Bauer again reached the podium on Sunday as part of the Czech relay team, who finished third in Sweden.

Radek Štěpánek was beaten in the final of tennis’s San Jose Open on Sunday by Andy Roddick. The top seed dispatched Štěpánek 6-4 7-5 after breaking the Czech’s serve in the very first game. 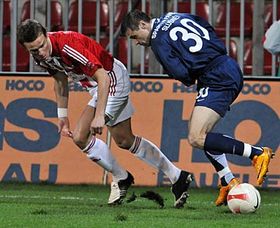 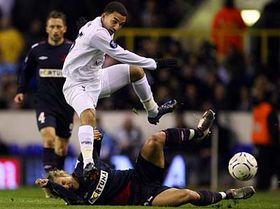 Slavia Prague - Tottenham Hotspur, photo: CTK That win puts Sparta just two points behind league leaders Slavia Prague, who play Brno away after the recording of this programme. Slavia put up a good fight against Tottenham Hotspur in London on Thursday, drawing 1:1 but losing 3:2 on aggregrate in the last-32 stage of the UEFA Cup.

Czech international goalkeeper Petr Čech will also be imagining what might have been against Tottenham: his (uncharacteristic) mistake in Sunday’s final of England’s League Cup allowed Spurs to beat Chelsea 2:1.