No medals for Czechs in Valencia after Šebrle sustains injury 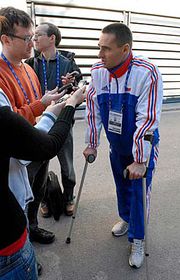 Roman Šebrle, photo: CTK The World Indoor Athletics Championships in Valencia were not a success for the Czech Republic. In fact it was the first time for 14 years the country came away from a major athletics event without a medal. What’s more, one of the country’s greatest athletes decathlete Roman Šebrle was injured in the heptathlon; the Czech – in second place after four events – had to be stretchered off after sustaining a hamstring injury during the 60m hurdles. The decathlon world record holder suffered a similar injury in Valencia a decade ago and joked that he would never go back to the city, not as a tourist and not even if they held the Olympics there. Let’s hope Šebrle is fit for this summer’s games in Beijing. 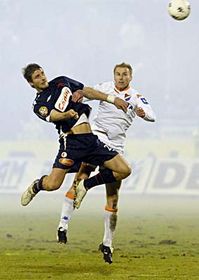 Slavia Prague - Baník Ostrava, photo: CTK The Czech football league leaders Slavia Prague dropped two points at the weekend, when they were held to a 2:2 draw by Baník Ostrava in front of almost 17,000 fans in north Moravia. But Slavia manager Karel Jarolím wasn’t complaining at the post game news conference:

“Twice we went in front and twice we lost our lead. On the other hand Baník kept going to the end. I can’t criticise my players for their dedication or fighting spirit. I think they all gave their all – and I think it was the same for our opponents. It’s just a pity games like this aren’t played every weekend, in this atmosphere.”

That result means second-placed Sparta Prague can close the gap on Slavia to two points if they can beat Teplice at home – that game was due to take place after the recording of this programme. 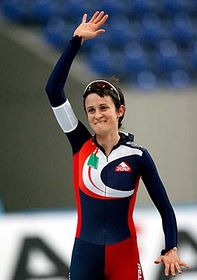 Martina Sáblíková, photo: CTK Japan’s Nagano has a permanent place in the hearts of Czech ice hockey fans, as the venue for the country’s great 1998 Olympic win. It has also become a happy hunting ground for speed skater Martina Sáblíková – on Sunday the 20-year-old defended her world champion’s title there with a time of 6:58.22 in the 5000m. That was a new course record in Nagano, and Sáblíková’s last race of the season.