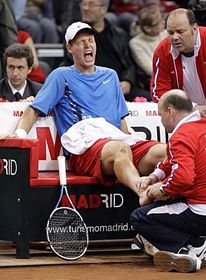 Tomáš Berdych, photo: CTK It was bad news for Czechs tennis fans at the weekend as the Czech Republic lost to Russia in the Davis Cup quarterfinals. On Sunday Czech star Tomáš Berdych was forced to concede his match to Nikolay Davydenko due to injury. The score in the 5th set of the crucial rubber was 6-3, 2-6, 6-7, 6-3, and 1-2 in the final set when Berdych went down on a forehand swing, badly twisting his ankle. Minutes later, he was out of the game. The concession lifted the Russians to an unassailable 3-1 lead in the best-of-five series. Radek Štěpánek and Pavel Vízner had already lost earlier in the day to Nikolay Davydenko and Igor Andreev in the men’s doubles. 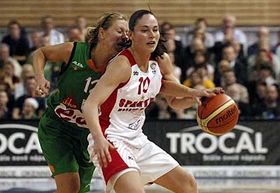 Gambrinus Brno - Spartak Moscow, photo: CTK Women’s basketball team Gambrinus Brno were beaten for the European League title on Sunday by Spartak Moscow. Spartak led consistently throughout the final match with Australia’s Laura Jackson doing the most damage, scoring 18 points and pulling down 12 rebounds to lead Spartak – last year’s champions – to the win. The final score was 75-60. Brno clinched the Final Four title back in 2006.

Hockey’s Slavia a win away from championship title 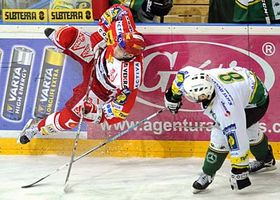 Slavia Prague - Karlovy Vary, photo: CTK In hockey, Prague club Slavia is now just one win away from clinching this year’s postseason title, currently leading Karlovy Vary 3-2. In Game 5, Slavia’s Adam Svoboda earned his second shutout of the postseason, while Slavia scored four. Karlovy Vary goalie Lukáš Mensator understandably expressed frustration over his team’s lack of spark. Slavia dominated on the powerplay and Jakub Klepiš and Jiří Drtina were the team’s only goal scorers, notching up two apiece. The game, held in Prague, was seen by a record 16,617 attendees including the country’s president, Václav Klaus. 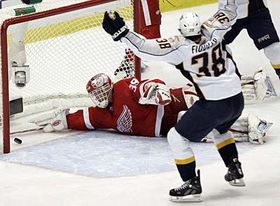 Dominik Hašek reaches for Nashville Predators' Jordin Tootoo's goal as Vernon Fiddler celebrates, photo: CTK Across the pond in the NHL playoffs the Detroit Red Wings now lead 2-0 in their best-of-seven series against the Nashville Predators. Detroit, with goalie Dominik Hašek, downed Nashville 4-2 but only after Nashville gave the Wings a bit of a scare. At 2-0 Hašek misread the puck taking an unexpected bounce, leaving the net wide open for an easy goal. Then, just 11 seconds later he allowed another and the game was tied 2-2. But Detroit came back to score two more and took the win.

The New York Rangers, with forward Jaromír Jágr, meanwhile, saw their series lead cut to 2-1 on Sunday after the New Jersey Devils rallied for a crucial overtime win. Jágr had three assists in the loss, while New Jersey’s Patrik Eliáš scored a powerplay goal to help his team to the win.

Football: Sparta just ahead of Slavia at top of table 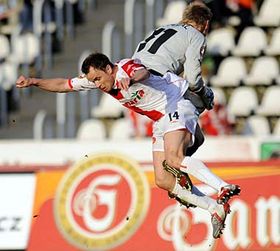 Slavia Prague - Liberec, photo: CTK Domestic football clubs Slavia and Sparta both saw action on Sunday with no change in the league standings. After respective 1-0 wins against Liberec and Kladno, Slavia and Sparta are now tied on 53 points, but Slavia remains behind their Prague rivals on goals.