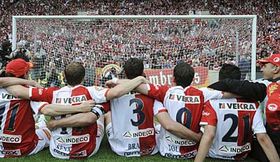 Photo: CTK Slavia Prague have been crowned Czech football league champions for the first time in 12 years. They needed only a home draw against Jablonec in the last game of the season, and a draw is what they got, the game finishing 2:2. The league title caps a dream season for Slavia, who reached the Champions League for the first time, and moved into a new stadium – indeed Saturday’s match was their first competitive encounter at the new Eden, and the 20,000-plus crowd was the biggest at any Czech league game this season. The title also came somewhat against the odds: Sparta Prague seemed to have one hand on the trophy, before taking only one point from a possible 12 in their last four games. Vladimír Šmicer and Karel Jarolím, photo: CTK “I think this year will go down in the annals of Slavia in golden letters. We were under a certain pressure immediately after the winter break, and it was hard to deal with. At one point we were written off, though in the end everything turned around. As they say, all’s well that ends well.”

Midfielder Vladimír Šmicer was part of the Slavia team which last won the Czech league in 1996 and rejoined the club last summer. Which title-winning side did he think was better?

“I think 12 years ago we had a really good team, and there was a bigger difference in quality between us and the other teams. This season things have been really balanced. In 1996 we really dominated the league – I’d say that team was a bit better, yes.” 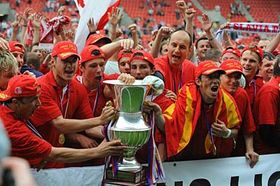 Photo: CTK Slavia’s league title gives them a place in the final qualifying round for the Champions League. Sparta, who came second, will take part in the second of three qualifying rounds for that competition. Ostrava, who finished third, are into the first round of the UEFA Cup.

At the other end of the table, Most and Bohemians 1905 were relegated. And just to conclude our end-of-season round-up, the top scorer in the Gambrinus League was Václav Svěrkoš of Baník Ostrava, with 15 goals. His form has earned Svěrkoš at least a place in the provisional Czech squad for the European Championship.

Petr Čech, photo: CTK The Czech national team are gathering in Prague for Euro 2008 preparations as we speak, though Chelsea goalkeeper Petr Čech won’t be joining them until later in the week – after the Champions League final against Manchester United. The 25-year-old says it will be the biggest game of his career so far.