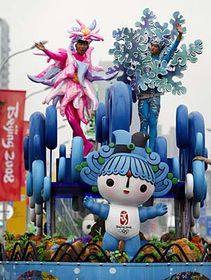 Photo: CTK The great canoeist Štěpánka Hilgertová has been chosen to carry the Czech flag at the opening ceremony at the Beijing Olympic Games on Friday. It will be a remarkable fifth Olympics for the 40-year-old, who took gold in the K1 event in 1996 and 2000. She will be the second Czech woman to bear her country’s flag at an Olympics opening, after speed-skater Martina Sáblíková led the Czech team at the last winter Olympics. Will that put more pressure on Štěpánka Hilgertová in Beijing? 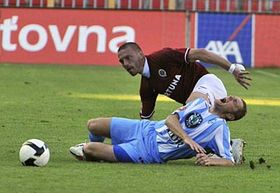 Sparta - Mladá Boleslav, photo: CTK The 2008-2009 season in Czech football’s Gambrinus League got underway on Saturday. The biggest gate of the day was at Sparta Prague, where 15,500 saw new captain Patrik Berger lead Sparta to a 1:0 win over Mladá Boleslav. Berger had a quiet enough afternoon, but did put full back Michal Kadlec through for the only goal of the game. Seven yellow cards were handed out, and Sparta manager Vítězslav Lavička says he instructed his charges to rein in their aggression.

“Maybe it was because it was the opening game, the motivation was high. We had to deal with it at half time, because there was a danger some of the players who got yellow cards in the first half could be sent off. Afterwards they played with greater responsibility in this respect.”

Sparta are in action again on Wednesday, when they take a 1:0 lead into the second, home leg of their Champions League second round qualifying tie with Sheriff Tiraspol of Moldova. Victory will see Sparta face either Panathinaikos or Dinamo Tiblisi. Slavia Prague play Italy’s Fiorentina for a place in the lucrative Champions League group stage.

…while Slavia lose at Liberec 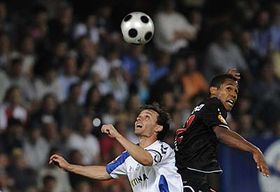 Slovan Liberec - Slavia, photo: CTK Back in the Czech league, Slavia got off to a poor start, with the defending champions losing 2:1 away to Slovan Liberec on Sunday evening. Slavia goalkeeper Martin Vaniak won’t have slept well on Sunday night, after his poor positioning allowed Liberec to score their second goal from a free kick 30 metres out. 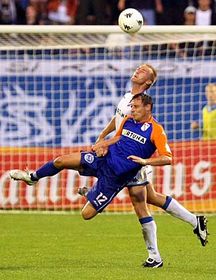 Baník Ostrava - Kladno, photo: CTK Elsewhere, Baník Ostrava beat Kladno 1:0, with last season’s top scorer Václav Svěrkoš opening his account immediately. Bizarrely, Kladno were also kitted out in Baník strips. Their own were deemed too similar to Baník’s white home strip, so the referee ordered them to wear an old Baník away kit.

Czech goalkeeper Jan Laštůvka has signed a one-year loan deal with English club West Ham. Laštůvka, who is contracted to Ukraine’s Shakhtar Donetsk, is getting his second opportunity in the Premier League, after previously spending a season at Fulham. He won’t be the only Czech at West Ham: their goalkeeping coach is former international Luděk Mikloško, while the Hammers also have young Czech goalie Marek Štěch on their books.