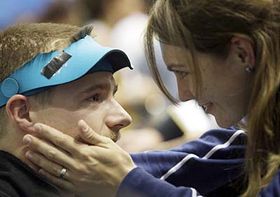 The Summer Olympic Games in Beijing are continuing well for the Czech Republic, with a medal tally of five – two Gold and three Silver – putting the country in 17th place in the overall nation standings.

Last Thursday, shooter Kateřina Emmons, won her second medal of the games. Following her gold in the 10 m rifle, she won silver in the women’s 50 metre Three-Position event. But Kateřina’s husband Matthew Emmons, on the US Olympic team, was less fortunate: just like four years ago in Athens, he lost almost-certain gold, this time by flubbing his last shot in the men’s 50 Metre Rifle Three-Positions. Four years ago in Athens he also led in competition and had gold all but wrapped up, only to hit the wrong target. This time, like the last, his wife Kateřina watched in disbelief:

“I can’t believe that this could happen twice. I really feel sorry for him. Both times at the Olympics! I think there must be some hidden reason for this to happen twice! On the other hand, the fact that he can take one poor shot and still finish 4th overall means he’s a very fine shooter!”

Czech consolation for her American husband from Kateřina Emmons. Both are convinced something good will come out of the loss: it did last time. It was after his mistake in Athens that Emmons first met Kateřina, then named Kurková, who he later married. 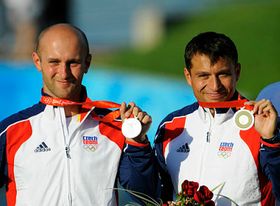 Jaroslav Volf and Ondřej Štěpánek, photo: CTK In other Olympics competition last week, Czech competitors proved strong on the water winning medals in the double canoe as well as single scull. Czechs Jaroslav Volf and Ondřej Štěpánek won silver in the double canoe on Friday, beaten only by the Hochschorner brothers. A day later rower, Ondřej Synek became the 3rd Czech at this year’s Games to secure silver, beaten only by Norway’s Olaf Tufte. Štěpánka Hilgertová, photo: CTK Onto unfortunate finishes, last Friday seasoned Czech kayaker Štěpánka Hilgertová – a two-time former gold medal winner - must have wished she could have another go in the Women’s K1 Kayak Single: after coming in the top three in most of the preliminaries and 3rd in the semi-final heat, the World No. 1 capsized in the final, only to finish a disappointing 9th. 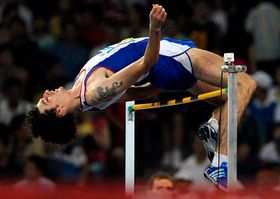 Jaroslav Bába, photo: CTK The Czechs are hoping their athletes will be able to secure still more glory in Beijing this week: among names to certainly watch will be javelin-throw favourite Barbora Špotáková. On Tuesday, Czech high-jumpers Jaroslav Bába and Tomáš Janků will compete in the high jump final.

Other hopefuls in the coming days will include two Czech specialists in BMX and one competition many of course will be looking forward to will be the decathlon featuring defending gold medal champion Roman Šebrle. Sparta - Olomouc, photo: CTK In other Sports News, the Czech Gambrinus Liga continued in the new football season at the weekend with all teams now having lost points. Sparta tied somewhat unexpectedly with Olomouc, the tying goal coming from Olomouc’s Tomáš Kazár in the 81st minute. He came on just two minutes earlier before beating goalkeeper Kozáčik with a well-placed lob. He called scoring a goal against the top-flite Prague club a “boyhood dream”.

In other matches, Bohemians downed Kladno 3:1, Plzeň tied Slavia 1:1 and Brno, topping the table after three games, tied Ostrava in a scoreless match-up. 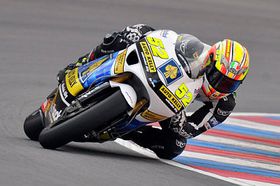 Lukáš Pešek, photo: CTK The Czech rider Lukas Pesek came fourteenth in the 250ccm category at the Czech motorcycling Grand Prix in Brno on Sunday. Alex Debon of Spain, riding for Aprilia, came first, followed by his team-mate Alvaro Bautista. Italy’s Marco Simoncelli, who started in the pole position, came third. The race was attended by around 200,000 spectators.