Barbora Špotáková, photo: CTK The Czech Republic finished 24th in the overall medals table at the Beijing Olympics, with three gold and three silver medals. The golds were for shooters Kateřina Emmons in the 10 m air rifle and David Kostelecký in the trap, and Barbora Špotáková in the javelin. Špotáková in particular caught the public imagination, as she collapsed to her knees in disbelief when her last throw put her top of the podium.

The country’s three silver medals went to Kateřina Emmons (this time in the 50 m rifle three positions), Jaroslav Volf and Ondřej Štěpánek, who were competing in the double canoe, and rower Ondřej Synek. 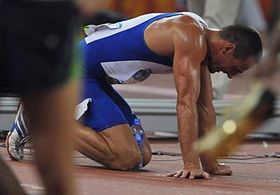 Roman Šebrle, photo: CTK Among those who will come home disappointed are two-time Olympic water slalom champion Štěpánka Hilgertová, who capsized in the final after risking going all out for victory, and defending decathlon champion Roman Šebrle, whose sixth place finish in Beijing was of a piece with what has been a frustrating season in general. David Svoboda, meanwhile, could have taken gold in the modern penthalon, after setting a new Olympic record in shooting. However, his medal hopes were dashed by a disobedient horse in the riding phase.

Six medals is the smallest haul Czech athletes have taken home from an Olympics since Melbourne in 1956, but the fact that three were for first place – and none were bronze – means the Czech Republic’s performance in Beijing is being viewed as creditable. 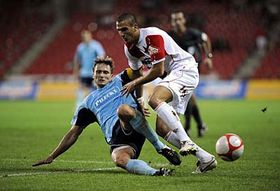 Slavia Prague - Bohemians, photo: CTK Both Sparta and Slavia Prague notched up high-scoring victories in the Czech league at the weekend. Sparta, who top the table, beat České Budějovice 4:1 in south Bohemia, while Slavia put five past FC Bohemians without reply in the capital. Both clubs will need to score a fair few more if they are to reach the group stage of the Champions League, as they go into the second leg of the last qualifying round this week with steep deficits to overhaul; Slavia lost 2:0 to Fiorentina in Prague in the first leg, while Sparta were beaten 2:1 away by Panathinaikos. 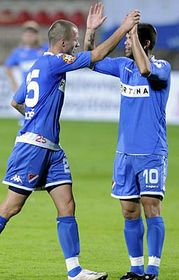 Václav Svěrkoš (left), photo: CTK Back in the Czech league, Baník Ostrava beat Viktoria Žižkov 3:0 on Sunday, with two of those goals coming from striker Václav Svěrkoš. His previous outing was as a substitute in the Czech Republic’s 2:2 draw with England at Wembley last week, a rather impressive first result under new Czech manager Petr Rada. However, Rada’s first real test will be when the Czech Republic’s World Cup qualifying campaign gets underway against Northern Ireland in Belfast on September 10.