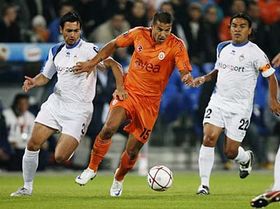 Milan Baroš (middle), photo: CTK Czech striker Milan Baroš, who has gone through a series of clubs and shown relatively poor form since first shining at Euro 2004, has finally hit his stride. So far his move to Galatasaray Istanbul has paid off: the striker has notched up four goals in the last two games. On Thursday Baroš scored twice against Swiss side AC Bellinzona in their teams’ UEFA Cup opener (Bellinzona lost) and he scored twice again at the weekend in the Turkish domestic league, leading his team 4:1 over Kocaelispor. His first tied the match at 1:1, while his second effectively put the game out of Kocaelispor’s reach. Baroš has strived for a while now to recapture some of the old magic: now Czech national squad coach Petr Rada will be hoping the striker will keep it up in the team’s next World Cup qualifying matches.

This year’s Champions League finalist Chelsea and winner Manchester United faced off again and fought to a 1:1 draw in the English Premiership at the weekend. Chelsea went 1:0 down on a goal by Ji-Sung Park, who beat goalkeeper Petr Čech in the 18th minute. Chelsea were able to even the score only ten minutes from time. Chelsea have not been defeated at home in 85 matches, last losing at home to Arsenal. That was in 2004. 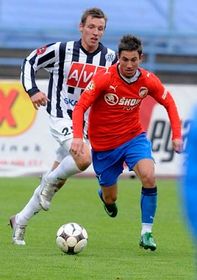 Slavia - Karlovy Vary, photo: CTK Slavia Prague remain unbeaten in the Czech domestic hockey league and notched up another win at the weekend to retain their hold on top spot in the league standings. Twice Slavia came from behind against Karlovy Vary, edging the famous spa-town team 3:2 in the finish. Plzeň, meanwhile, lost their first game in the new season in a 4:1 lopsided result to Vitkovice. Plzeň are second in the standings.

Jágr back on track but Omsk without coach

Czech hockey star Jaromír Jágr, who plays for Avangard Omsk in the Continental Hockey League, has finally gotten back on track, scoring two goals in Omsk’s last game, beating Novosibirk. Jágr’s Omsk had been off to a shaky start, leading to the firing of the team coach – allegedly at Jágr’s request. The famous centre is then said to have put a phone call through to Canadian Wayne Fleming – assistant coach with the Calgary Flames - asking him to step in. The assistant coach has reportedly agreed but some sources have now said his taking over is far from a done deal yet. 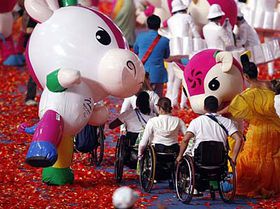 Photo: CTK The Czech Republic won a total of 27 medals at the Paralympics in Beijing which have now successfully wrapped up. In all, the Czechs took six gold, three silver and 18 bronze. The last of those medals – a bronze – was won by Rostislav Pohlmann in the javelin, F57/58 category. Pohlmann set a new Czech record in the event with a throw of 39.85 m. He also has a bronze medal in the discus.