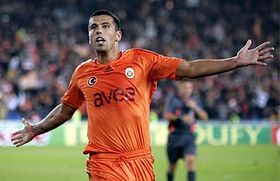 Milan Baroš, photo: CTK Milan Baroš has again scored two goals in one game for his new club Galatasaray. The 26-year-old spent unsuccessful spells at a series of clubs before joining the Turkish side, and hadn’t scored twice in a game for two and a half years. Now, with a brace against Konyaspor on Sunday, Baroš has done it three times in a week. The striker has put his incredible form down to Galatasaray’s passing game, which he says suits his style. 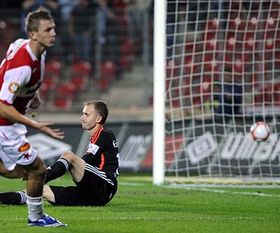 Slavia Prague - Olomouc, photo: CTK Slavia Prague went to the top of the Czech league on Sunday evening after an impressive home win over Olomouc. Tomáš Necid opened the scoring with his seventh goal so far this season, Jaroslav Černý added a second just minutes after coming on as a substitute and young Italian striker Gianluca Litteri secured the points with his first goal for the club making it 3:0. Sparta Prague, meanwhile, can take the lead again, if they can overcome Liberec away on Monday evening – after the recording of this programme. The result of that game will determine which of Prague’s big two go into next weekend’s derby at Letna as leaders. Between now and then, both clubs – along with Baník Ostrava – will be playing in UEFA Cup ties to decide spots in the competition’s group stage.

Back in the Czech league, Mladá Boleslav beat Viktoria Žižkov 2:1 in the capital to go third at the weekend, while Brno are in fourth after a 2:0 win over Kladno. 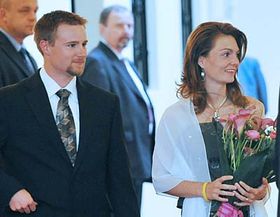 Matt Emmons and Kateřina Emmons, photo: CTK Olympic shooting champion Kateřina Emmons has announced she is ending her season early and taking the whole of next year off. Emmons, who is 24, took gold in the 10 m air rifle and silver in the 50 m three positions in Beijing in the early stages of pregnancy. The Czech is married to the well-known American shooter Matt Emmons. 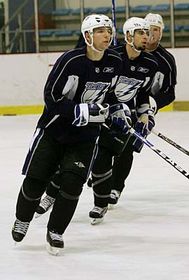 Tampa Bay Lightning on the ice at Prague's 02 Arena, photo: CTK Tampa Bay Lightning have trained on the ice at Prague’s 02 Arena for the first time, ahead of the historic opening of the NHL season at the venue next Saturday. Tampa Bay’s opponents that and the next night will be New York Rangers, who are set to play two exhibition games in Switzerland before arriving in Prague. The first NHL games ever held in the Czech Republic promise to be a real one-off treat for Czech hockey fans.

Games in the Czech Extraliga will be postponed from Sunday to Monday because of the second NHL game. Nine rounds into the regular season Slavia Prague top the table – that despite their first defeat at the weekend, 3:1 at home to Litvínov.